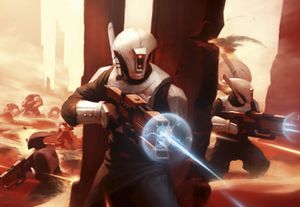 The Fifth Sphere has continued on, battling the Orks of the Ful'na Nebulae as well as scattered Tyranid Hive Fleet remnants. Due to the calamities consuming the Imperium in the aftermath of the Great Rift's formation, little has been seen of the Imperium. However nearby Imperial worlds were rapidly colonized with a violent eagerness on the part of the former commanders of the Fourth that saw mass purges uncharacteristic of the Tau. Prisoners were massacred and Auxiliaries were intentionally sacrificed in battle. The Massacre of the Dul'un Lakes and the Eight Days of Infamy are the most famous episodes from this controversy. Eventually, Shadowsun and the Ethereal Council disciplined the Fourth Sphere commanders with a ritual punishment known as the Malk'la before they were returned to the ranks or sent back to the empire for re-assimilation. After a massacre and bloody Kroot uprising upon the colony of Ky'san, all auxiliaries were removed from contingents of Fourth Sphere Tau.[1]

Despite the controversy surrounding Fourth Sphere Tau, the Fifth Sphere has continued at a formidable pace. In the span of several months several planets were occupied and transformed into thriving colonies.[1] Most of the expansion is taking place from the Nem'yar Atoll, far to the north of the Tau Empire proper.[3] Ongoing warzones are located at the Chalnath Expanse[2d], Haephos[2c], Astorgius[2b], Riatov[3], and Vorotheion.[2c]