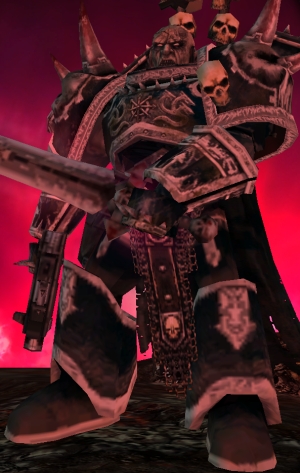 Firaeveus Carron was a Khornate Chaos Champion from the Alpha Legion that led his forces to the Kaurava system.

Carron's forces arrived in Kaurava after a Warp storm had taken hold over the edges of the planetary system. The storm itself was caused by a latent psyker in the service of the Imperial Guard, who was driven feverishly mad and possessed by the Chaos Gods. A massive rift in space and time was forged from the black rites committed by the psyker. The results were catastrophic: Chaos poured out, the Alpha Legion appeared, and the Warp storm blossomed from the rift.

The newly arrived Alpha Legion took up their base of operation in the Peninsula of Iseult on Kaurava IV, which was revealed to be the very heart of the Storm itself, and constructed numerous shrines to maintain a permanent link to the Warp. Lord Carron promptly launched his conquest of the system.

Despite hailing from a legion devoted to Chaos Undivided, Carron has an incredible bloodthirst and seems to devote himself entirely to Khorne. Similar to his peer Lord Crull, who led Chaos forces on the planet Lorn V, he shows a similar psychotic behavior and lack of mental balance.

He excels in close combat, initially armed with a power sword and bolt pistol, he also uses a Manreaper and Khornate Chainaxe along with a Plasma pistol and Meltagun throughout the campaign. Towards the end of the conflict he also receives the gift to shoot daemonic fire from his hands and the ability to become a Daemon Prince.[1]

Outcome of the Kaurava conflict

Should Lord Carron's conquest succeed, however, the planets of Kaurava are wholly re-dedicated to Chaos. The warpstorm grows in size and strength, and the Alpha Legion uses it to bring forth Daemons and Chaos forces alike in preparation for a far greater conflict against the Imperium of Man. His ending also details the origins of the Kaurava conflict where an Imperial Guardsman was ignorant of his Psyker abilities and was easily possessed by the Daemons of Chaos. This had him perform several rituals that eventually called upon the Warp Storm that started the storyline.

As the canon outcome of the game sees the ]]Imperial Guard]] victorious over all other factions, it can be assumed that Carron perished over the course of the campaign.