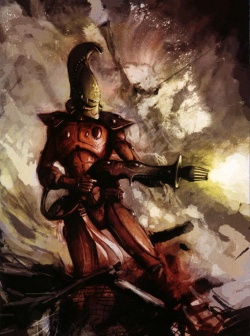 The Fire Dragons are one of the forms of Eldar Aspect Warriors, who represent a different aspect of the Eldar war god Kaela Mensha Khaine. Embodying the writhing, sinewy dragon of Eldar myth, Fire Dragons are aggressive and warlike close combat fighters who utilized heat weapons to destroy enemy vehicles and strongpoints.[1a][2a][3a] 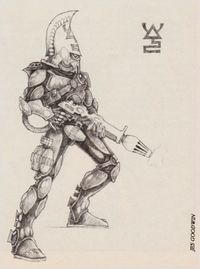 The founder of the Fire Dragons was Fuegan, the first of the Phoenix Lords who learned the ways of war from Asurmen and established his own Shrines on many Craftworlds to school new pupils in the art of fire and flame. When the Fallen Pheonix Arhra betrayed his fellows and attacked the Shrine of Asur, Fuegan refused to leave and was thought lost when the shrine was destroyed until he reappeared centuries later. Tradition has it that Fuegan will call together the Phoenix Lords for the Rhana Dandra, the Final Battle, and be the last one to fall in this epic confrontation.[1c][2b][3b] A squad of Fire Dragons can number between five to ten warriors, typically including an Exarch to lead them, and may be delivered into battle within the protective hold of a Wave Serpent transport.[3c] 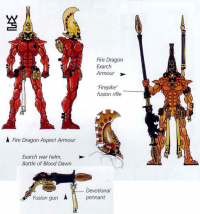 Fire Dragons take savage delight in the destruction they cause, and nothing short of the complete annihilation of the enemy will suffice for these creatures of wanton destruction.[3a][4] They specialise in destroying enemy war machines and fixed fortifications, as well as rooting out heavily-armoured infantry and weapon emplacements. In this role each Fire Dragons wields a mighty Fusion Gun, capable of reducing an enemy to a cloud of superheated vapour in a second, or a battle tank into a pile of molten slag. Against targets too tough for even these weapons the Fire Dragons carry Melta Bombs, disc-shaped bombs which can be attached to any surface and detonated on command.[3a] However, the short range of their weaponry limits the Fire Dragons' effectiveness, especially when speed and tactical flexibility are needed.[1a] It is also the reason Fire Dragon Aspect Armour is thicker compared to a Dire Avenger's, including many spiny protrusions which make it stiffer and more resilient, so that the wearer can properly close with the enemy and deliver death and destruction upon them.[1a] Fire Dragon armour is painted in fiery colours, such as red or orange.[1b]

An Exarch is an Eldar who has become lost upon the Path of the Warrior and will forever remain a warrior in service to Khaine. They wear more elaborate and ornate versions of Aspect Armour inhabited by the souls of past Exarchs, passing on their wisdom and forming a pool of raw psychic energy.

It is said that Exarchs of the Fire Dragon Aspect generate a corona of lambent flame around their bodies when the lust for battle has taken hold. These crack shots can pintpoint targets with unerring accuracy, and under their guidance Exarchs can train their Fire Dragon squad to become superb tank hunters.[3a] Instead of a Fusion Gun some Exarchs will wield a Fire Pike or Dragon Breath Flamer instead.[3c]