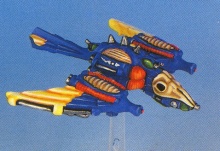 The Fire Lord is a Daemonic super-heavy assault aircraft aligned with the Chaos God Tzeentch. Its jewel-encrusted hull is studded with swiveling Lascannons and the pinions of its majestic wings bear a pair of deadly Flame Cannons. The aircraft is capable of tremendous speeds, making it capable of devastating attack-runs - dropping its deadly cargo of firestorm bombs on helpless foes below. The Fire Lord is sometimes used as an Attack Craft on Chaos Vessels.[2]