The Fire Lords are a Codex Chapter of Space Marines[1a].

The Fire Lords precede assaults with a barrage of incendiary missiles, and hurl themselves at the charred foe before the flames have burnt themselves out.[1a] 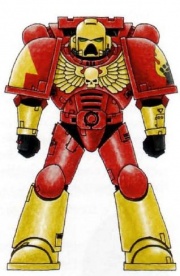 The Fire Lords favoured tactic is launching a planetary assault, which begins with incendiary bombardments, and should the defender survive, they only do so to face close-range bombardment and promethium, usually delivered by Thunderfire Cannons and Land Raider Redeemers. Then, Tactical Squads will deploy in Drop Pods to bring death to the enemies of the Imperium.[2]

Due to a clerical error in the Imperium's labyrinthine bureaucracy, the once-prosperous world of Grissen had gone unnoticed until a mid-level functionary discovered that the planetary tithes were now some eight thousand years overdue. An Imperial Guard regiment was immediately raised to bring the Emperor's law back to Grissen. When the regiment found itself overwhelmed by the sheer ferocity of the fighters planetside, a task force from the Fire Lords Chapter, under the command of Jaric Phoros, joined the fray.[1c]

At first the Space Marines made little progress. The natives were so entrenched that even the most devastating orbital bombardments made scant impact on their positions. Nonetheless, the Imperial decree was that Grissen should be brought back into the fold, for it would prove an excellent recruiting ground for the Imperial Guard, and so Phoros held back from ordering Exterminatus. Biting back his mounting frustration, Phoros directed his Techmarines to construct a weapon that would win the war. Within a week of the first Land Raider modifications the Fire Lords took Grissen's capital city. Within a month, the largest planetary faction was suing for peace and Grissen was part of the Imperium once more.[1c]

In the wake of the Grissen campaign, Phoros disseminated his new design's schematics. Having always been possessed of a sardonic frame of mind, he named the new pattern Prometheus after a god from Terran legend who brought fire to men. He changed the official designation to Redeemer only upon learning that the name "Prometheus" already belonged to a Land Raider variant developed by the Salamanders. Nonetheless, the original Redeemer still serves in the Fire Lords' Second Company, the name Prometheus resplendent on its flanks and honored in the Chapter's Histories.[1c]

In 931.M38, they stopped the Purge invasion of Bereguel Tertia launched from the Space Hulk Hell's Last Duke.[6]

During the 13th Black Crusade, the Fire Lords and Doom Legion came to the aid of the 4th Cadian army on the besieged Fortress World of Kasr Sonnen. Despite this, Imperial projections showed the defenders would be overwhelmed by the attacking Alpha Legion forces in 2-3 days without further reinforcements.[7]

At an unknown date, the Fire Lords battled the Orks in the Siege of Kantarel alongside the 9th Company of the Raven Guard and the 293rd Regiment of the Tallarn Desert Raiders.[11]

The Chapter is known to have taken part in the later stages of the Assault on Beroghast.[3] In 748.M41, the Chapter lost its Chapter Master in the Blood Star Campaign.[5] In 990.M41, they avenged the destruction of the Emperor's Swords Chapter by exterminating the Necrons who had annihilated them on the world of Bellicas.[1d]

During the Invasion of the Stygius Sector the Fire Lords sent forces to aid the Iron Hands and other Successor Chapters in the Second Relief of Mordian.[10] The Fire Lords later sent 2 companies to Vigilus as part of the War of Beasts.[8]