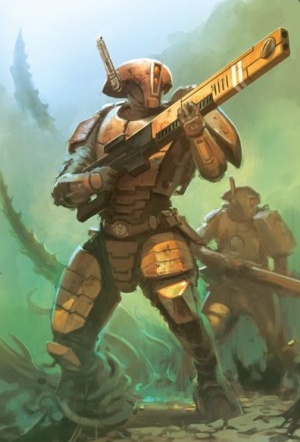 The Fire Warrior is the backbone of Tau military force, the Fire Caste.[4c]

Having been bred and trained to be soldiers at birth, Tau Fire Warriors strictly follow both the Greater Good and the Code of Fire and represent the best fighters of their species.[4c] They are soldiers outfitted with a wide variety of advanced technology. Their main firearm is the pulse rifle, although they do sometimes use pulse carbines. As basic infantry, they are deployed in smaller numbers than other races' infantry because of the superior firepower they can bring to bear. Fire Warriors are known to be efficient, professional, and cautious fighters. Often deployed from a Devilfish APC, they are able to rapidly deploy and lay down withering barrages of fire against their foes. The basic team is made up of five Fire Warriors, but it is not uncommon for them to contain up to twelve, with or without a Shas'ui team leader present as one of the 5-12, as well as gun drones, marker drones, shield drones, a guardian drone, and/or a turret drone.[1]

The Strike Team is the most common type of Tau Fire Warrior deployment. A Fire Warrior Strike Team is a high-speed detachment of shock troops who lay down sheets of withering pulse rifle fire, throwing electromagnetic pulse grenades and aiming powerful tactical support turrets at a rapidly-depleting foe.[5] 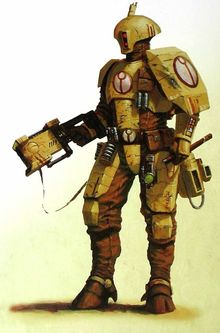 The Breacher Team is a type of Tau Fire Warrior deployment. The Fire Warriors Breacher Team specializes in brutally effective close-range assaults, clearing buildings of threats in a tight, tactical formation and delivering sharp, shockingly sudden frontline displays of raw incendiary power that grind enemy soldiers into dust, discharging Pulse Blasters and hurling Photon Grenades until they are certain every path is clear.[6]

The ranks of Fire Warriors is part of the greater Tau Caste System, with promotion based on seniority and battlefield experience. After four years 'on the line' as a standard Shas'la, Fire Warriors can undertake the Trial by Fire, an ancient ritual that can see them promoted to Shas'ui. If they succeed in the Trial, they can go on to serve in elite Battlesuit units.[4b] Some of the most seasoned Fire Warriors in a Cadre may eschew promotions to Battlesuit units, instead becoming Fireblades.[3]

Fire Warrior squads are typically armed with Pulse Rifles but sometimes are also seen with Pulse Carbines and Pulse Blasters and the Shas'ui may be equipped with a Markerlight. Fire Warriors also typically carry Photon or EMP Grenades, and frequently make use of Devilfish vehicles for transport. Tau military doctrine does not allow for organic, integrated heavy weapons, so Fire Warrior teams are reliant on other units for heavy support, typically in the form of Seeker Missiles.[1]

The combat armor worn by the Fire Warriors is lightweight and agile but sturdy, produced by advanced metal fusing techniques that are more advanced than Ork or Imperial methods.[4a] The outer surface of the armour is a hard, ultra-dense nanocrystalline metal bonded to an inner layer of high-performance, thermo-set molecular polythene. The inner layer acts as an energy-absorbent padding which prevent blunt trauma wounds from high-velocity impacts.[7a] The enlarged single shoulder pad is particularly useful, as Fire Warriors are trained to position themselves in a way to use it as a shield. In addition, Fire Warrior helmets contain a number of aids, including sensors, target-trackers, air quality monitors, and communications uplinks.[4a] Breachers also carry field amplifier relays as backpacks, allowing for increased protection from nearby guardian drones; it is unclear why members of strike teams do not.[8]

Fire Warriors make frequent use of supporting technology in field operations, most notably drones, including the DS8 Tactical Support Turret.[6]