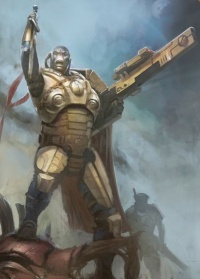 Fireblades (or Shas'nel in Tau)[3] are members of the Tau Fire Caste.[1]

Consisting of the most grizzled and seasoned veterans of their Cadre, their skills in the art of the Fire Warrior way of battle has led them to eschew Battlesuit technology, preferring instead to be equipped with a Pulse Rifle and Bonding Knife. Fireblades typically serve as field commanders and their experience on the battlefield has made them experts in directing firepower to maximize damage to enemy targets.[1] Owing to their status, Fireblades also wear heavier armour in addition than standard Fire Warriors.[2]

The path that the Fireblades have taken mean they can never rise to the rank of Shas'o, instead being limited to that of Shas'el. Nor does the title carry the esteem associated with those who wear Battlesuits. Nonetheless, the Fireblades are still highly respected, not least because of their willingness to forgo prestige.[3] 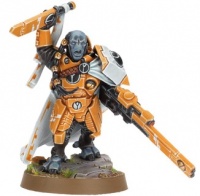