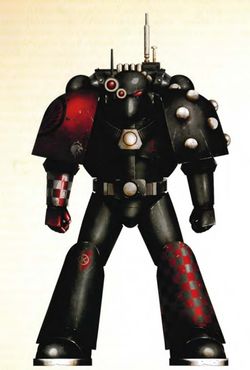 The Firewing was one of the six "wings" of the Hexagrammaton in the Dark Angels Legion during the Great Crusade and Horus Heresy,[1]

The smallest wing of the Hexagrammaton, the Firewing was dedicated to the bloody subtleties of war. It was the hidden blade of the Legion and utilized spies and assassins. Within its ranks were a mix of stalker champions and Moritat killers, all bound by their shared expertise in the art of subterfuge. The Firewing sought the destruction of the enemy through the elimination of their command structure and when given free rein upon the field of battle they waged a war of wills, seeking to break their resolve rather than mounting an all-out assault. They considered knowledge amongst the keenest of their weapons, allowing them to strike at the enemy's weak points where their limited numbers could be the most effective. As such, they possessed the most extensive library of any of the other Wings, a vault that contained the accounts of thousands upon thousands of Human and Xenos factions. This vault was in turn guarded by a sub-faction of the Wing dedicated to safeguarding its secrets. During the Second Rangdan Xenocide the Firewing would sustain severe casualties, reducing it to a fraction of its former size.[6a]

Of all the Wings, they were the least changed upon the arrival of Lion El'Jonson and many of the eldest marshals of the Firewing were veterans of the Unification Wars and early Great Crusade. The introduction of Caliban influence and recruits did little to change them, and they maintained a policy of recruiting only from Terra and colonies surrounding it. It was also notable for a strong link to the Luna Wolves/Sons of Horus, who recruited from a number of the same worlds. This connection turned to a bitter hatred upon the outbreak of the Horus Heresy.[6a]

The Firewing included unique troops known as the Enigmatii.[6] Its troops favored Mk.VI Power Armour due to its advanced augur and vox systems.[6b]

The Firewing flame symbol resembles the heraldry of the Consecrators, a Successor Chapter of the Dark Angels.[3]