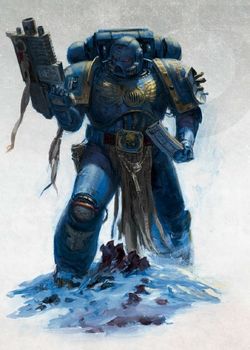 For ten thousand years from the Great Crusade until the end of the Thirteenth Black Crusade, the Firstborn were simply the Adeptus Astartes. However following the development of Primaris Space Marines by Belisarius Cawl the "Firstborn" as they became known faced the prospect of obsolescence at these larger, physically stronger, and mass produced warriors.[4] Originally, in the early stages of the Indomitus Crusade, most Primaris were produced by Cawl himself and, though developed by the gene-seed of the Primarchs, lacked a distinct identity, instead being gathered in armies known as the Unnumbered Sons; however, as the Crusade progressed, the Unnumbered Sons were distributed to either new Chapters of the Ultima Founding or into existing Space Marine Chapters.[2a]

Even though 94% of Chapters have accepted Primaris Marines into their ranks[2] Firstborn-Primaris relations have had issues. To many, the Primaris were new arrivals often recruited away from a Chapter's homeworld and new to the culture, traditions, and ways of the Chapter. Many arrivals from the Unnumbered Sons into existing Chapters felt like strangers.[2b] When some Firstborn first saw the Primaris, they regarded them as mutants.[4] This tension was exemplified in the Space Wolves, where many Wolf Lords resisted accepting Primaris Space Marines.[3] While the likes of Krom Dragongaze embraced these new warriors, Logan Grimnar himself was distrustful and say these warriors not of Fenris as means to control the Wolves by Guilliman.[11a] However after experiencing the trials of Gaius, Grimnar had a change of heart.[11b] In the White Scars, many Firstborn saw that these warriors were not of Chogoris nor knew the ways of their Chapter's culture, but at the same time understood the necessity of Primaris Marines in defending the Imperium.[4]

Notable Space Marine officers who have openly expressed distrust of Primaris Space Marines are Flesh Tearers Chapter Master Gabriel Seth[9] and Raven Guard 9th Company Captain Vos Delorn.[8] In the Unforgiven, there was much hesitancy over allowing Primaris Marines into the Inner Circle.[10] In the Black Templars, High Marshal Helbrecht approved of Primaris Space Marines and most of his forces accepted them, but the issue still turned disastrous for the Angevin Crusade.[12]

In an attempt and promote unity between Firstborn and Primaris Marines, Roboute Guilliman often used them as political equerries and symbols of his authority. For their part, most Primaris Marines looked to their Firstborn brethren for sage advice, drawing from experiences from their many centuries of conflict. Primaris Marines learned this lesson in the early days of the Indomitus Crusade, where many had fallen in battle due to their lack of experience.[2b]

Originally, Firstborn could not survive being converted into Primaris Marines. However this changed when Ultramarines Chapter Master Marneus Calgar crossed the Rubicon Primaris and became the first Firstborn to survive transitioning into a Primaris Space Marine. Since then, the process has been repeated for Firstborn across multiple Chapters.[5]