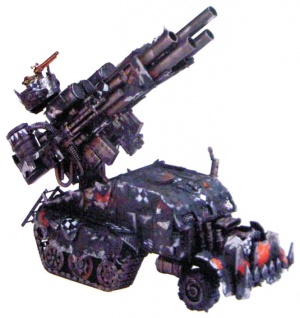 The Flakkatrakk is an Ork anti-aircraft vehicle.

Essentially a Wartrakk equipped with varying number of Flakka-Dakka Gunz, the design was pioneered by the Mekboy Grimgutz, who was sick of local Ork aircraft constantly buzzing his workshop. He designed the weapon in the course of an afternoon to shoot down the pests. Firing the same explosive 'glowy bullitz' used by Flash Gitz, Flakkatrakk's weapons are often fired by Grot assistants and are capable of filling the skies with hundreds of rounds per minute, making them a grave threat to any aircraft that ventures into its line of sight. The design has become popular and copied by many other Mekboyz in light of its success, and wherever the Orks are beset by enemy aircraft a Flakkatrakk is likely to appear.[1]