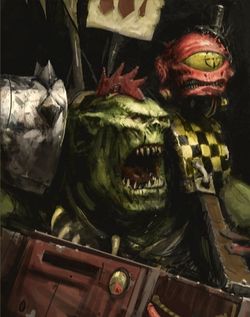 Flash Gitz are a type of Ork warrior common in Freebooter bands.

Flash Gitz are Nobz who are absolutely addicted to guns that make lots of noise. Unlike most other Nobz, Flash Gitz prefer firepower to being "stompy", and thus prefer ranged combat to melee. In battle, Flash Gitz wield massive Snazzguns and are equipped with bionic eyes most commonly referred to as Gitfindas.[8]

Flash Gitz usually spend their wealth on increasingly kustomised weapons and equipment and are the most common amongst the Bad Moons Clan, flaunting their wealth with not only their large Snazzguns but also with well-dressed Grots and a flashy wardrobe of their own. These Orks often become outcasts because of their completely arrogant, obnoxious, and treacherous natures, frequently becoming Freebooter mercenaries. However this does not effect their own outlook, as Flash Gitz consider themselves to be at the very top of Greenskin society. Flash Gitz prefer the Freebooter and mercenary lifestyle as it allows them to not only amass a massive amount of wealth in a short period of time but also eliminates the requirement of splitting any of their earnings with a troublesome Warboss.[8]