From Warhammer 40k - Lexicanum
(Redirected from Flayed Ones)
Jump to: navigation, search 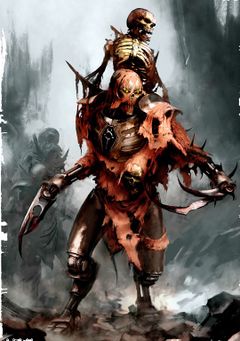 Flayed Ones are Necrons who have succumbed to the Flayer Virus of the C'tan Llandu'gor, a process which drives them insane with hunger for blood and gore. They wear the skin and body parts of their opponents, spreading mass terror across enemy lines.[1a]

Flayed Ones are loathed by other Necrons, fearing their virus. Due to this, any Necron infected will be exiled or destroyed, although some of them will always escape into their red pocket universe known as the Flayer Dimension[6] to join their degenerate kind. They have no regard for strategy or tactics, just appearing on battlefields, lured by the smell of blood and carnage, and will attack anything they see. Once an opportunity for blood has been detected a Flayed One will tear open reality with their claws and emerge from their pocket dimension.[5a] That being said, they are not stupid: Flayed Ones have been known to stalk prey and wait for long periods for an exposed weakness, giving them the perfect opportunity to attack. A Nemesor won't rely on Flayed Ones, nor change his tactics to accommodate their presence, as they are far from predictable and refuse to take orders. When a battle is over, the commander usually orders the destruction of the Flayed Ones but, just like before, some of them always escape back to their pocket dimension, waiting to once again materialize onto the battlefield to slake their eternal thirst and hunger for blood and flesh.[1a]

In the northeast corner of the galaxy exists an old Necron kingdom known as the Bone Kingdom of Drazak, which is a haunt for Flayed Ones; every Necron save it's ruler, Valgûl the Fallen Lord, is a Flayed One. Whenever the kingdom suffers from "food shortage", Valgûl issues a time of bounty, sending his people out in search for more.[1b] The Maynarkh Dynasty is also known to suffer from the Flayer Curse, though many have still managed to retain their sense.[3]

Flayed Ones can be lured to a target via Bloodswarm Nanoscarabs.[5]