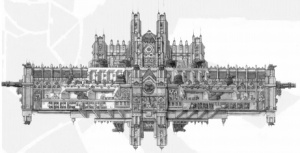 Fleet Based refers to Space Marine Chapters not based on a Homeworld. They possess only a fleet, one of the fleet ships usually serving as the Fortress Monastery. They are naturally among the most mobile Chapters. Some fleet-based Chapters are also called Crusade Chapters.[Needs Citation]

Many Chapters who rebelled at some point but were granted forgiveness are fleet-based crusade Chapters because they were forced to forfeit their Homeworld.[Needs Citation]