The Flesh Tearers are a Second Founding chapter, created when the Blood Angels legion split up after the Horus Heresy in accordance with the Codex Astartes. They suffer from a mutation in their gene-seed, making them far more prone to suffer the Black Rage than other chapters with Blood Angels gene-seed. If no cure is found the chapter is likely to be extinct within the next two millennia. The Flesh Tearers are also ill-famed for their savageness and thirst for blood in battle.[2] 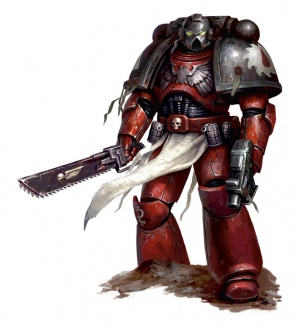 A Space Marine of the Flesh Tearers.[19] 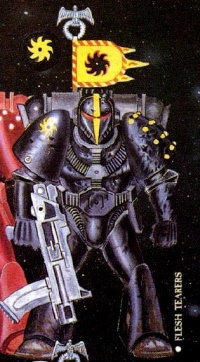 The Flesh Tearers Chapter was created in M31 when Roboute Guilliman decreed in his Codex Astartes that no longer should a single individual control the might of an entire Space Marine Legion. Thus, the Blood Angels were divided into several Successor Chapters; one of these being the Flesh Tearers under Chapter Master Nassir Amit[31]. Their reputation for blood-letting quickly spread in the aftermath of the Horus Heresy, indicating that the extensive flaw in their gene-seed was already present at their creation. Instead of checking the rumours of entire populations wiped out, the High Lords of Terra simply looked at the long list of worlds pacified and dismissed the accompanying casualty lists as inconsequential.[Needs Citation] Amit and his followers were still reeling from the death of Sanguinius during the Siege of Terra, and they eventually gave into their resentment and anger.[31]

After years as a crusading chapter, Nassir Amit eventually settled the Flesh Tearers on an extremely hostile Death World known as Cretacia. A lost colony of primordial humans proved perfect recruits for the chapter, being pure of taint and extremely strong. Amit became obsessed with Cretacia, believing it to be the manifestation of the Flesh Tearers' own nature, hoping that if he could tame its peaks he could temper the edges of his own fury.[31]

The chapter has since become more and more dependent on the easy access to recruits, as their gene-seed mutation gradually worsens. More and more marines succumb to the Black Rage, with few marines older than two centuries.[2] As of late M41, the Flesh Tearers only have 4 full Companies of marines, less than half of the normal number. If the degradation of their gene-seed continues at the same rate they will count no more than 200 marines within a millennium.[2] The Chapter has not used the process of Insanguination for millennia, and few know whether this has caused the wide presence of the Black Rage and Red Thirst among its members.[43a]

Over the years several Imperial bodies have questioned the combat doctrines and sanity of the Flesh Tearers. Many have refused to fight alongside the chapter, disgusted by their savagery in combat or fearing they would get caught up in the bloodshed along with the enemy. The chapter has been under Inquisitorial investigation since the The Kallern Massacres of M36.[2]

By the Age of the Dark Imperium the Flesh Tearers were greatly reduced, particularly after taking part in the Devastation of Baal.[43a] However despite the skepticism of Chapter Master Gabriel Seth, the Chapter has received an influx of new Primaris Space Marine recruits.[31a] 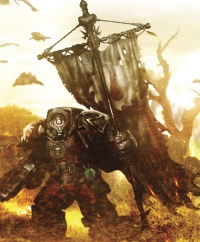 The Flesh Tearers were originally a standard Codex Chapter, but have over the millennia evolved into a pure assault force. Being obsessed with bloodshed often mean that they will close in on the enemy with utmost speed and engage in close combat.[Needs Citation] Flesh Tearers operations therefore have large numbers of assault marines and transport-mounted squads.[1] The Flesh Tearers deviate from most other Blood Angels successor Chapters in that their Death Company is a standing force.[43a].

The low number of marines has also led to an unexpected diversity in skills among the Flesh Tearers, with each marine being proficient in tactical, devastator, vehicular, and assault roles. The chapter has few vehicles apart from Rhinos and Razorbacks (a few Whirlwinds and one Baal Predator are also present). The exception to this are Death Company Dreadnoughts, which due to the Chapter's doctrine and genetic defects are fielded in large numbers. Above all else, however, Assault Squads are the dominant force of the Flesh Tearers and are fielded in above-average numbers.[29]

Flesh Tearers Company markings mirror those of the Blood Angels.[5c]

If the Chapter regains strength, the Company markings will progress the same way. Squad Number designation is Low Gothic numerals on the right knee pad.[5c]

Because of the genetic flaw that has ravaged the Chapter, the Flesh Tearers maintain an unusually large number of Space Marines with Apothecary training.[29]

The Flesh Tearers suffer an abnormal mutation in their Gene-Seed, which makes them more susceptible to the Red Thirst and Black Rage that plagues all the sons of Sanguinius. There were numerous incidents in their past where they lost control on the field of battle and turned on their own allies. It happened so often that under Gabriel Seth they now only work alone as they don't trust themselves around others. Furthermore, the Chapter struggled to maintain its numbers due to losses to the flaws and was expected to go extinct.

The introduction of Primaris Marines to the Flesh Tearers greatly stabilized their gene-seed. The Red Thirst and Black Rage are still present, though they are far less problematic — so much so that Gabriel Seth questioned whether their new Primaris recruits deserved to be call Flesh Tearers. The Red Thirst and Black Rage define their identity and culture and now that the flaws have been brought under control, their Chapter will never be the same.[32b]

Faced with their genetic flaw, the Flesh Tearers culture is one of grim fatalism and acceptance that they are eventually doomed to succumb to the Black Rage. Some among the leadership have begun to embrace the notion that if they cannot continue then their best approach is to make certain that they leave a bold legacy in keeping with the Chapter’s proud traditions. They seek to gain notable victory's and secure the Galaxy in the name of the Emperor and Sanguinius. The Chapter has come to embrace the savagery of which they have gained infamy.[29] This has led them to have strained relations with the Blood Angels and their other successor Chapters. Many Blood Angels successors fear the Flesh Tearers are what they are all doomed to become. Their savage behavior has also brought them into constant conflict with the Inquisition.[31]

Chapter Master Gabriel Seth has been a noted critic of the new Primaris Space Marines due to their implication that may spell the end of the Firstborn and the Chapter's identity. However many Flesh Tearers are nonetheless impressed with those Primaris that have fought under their livery.[30c]

The Flesh Tearers' fleet is small, with only one Battle Barge, the Victus currently in service. The Victus is an ancient vessel, having been in service possibly since the Great Crusade[2]. However, they also have seven[2] modified Strike Cruisers with an extended transport capability.[Needs Citation] 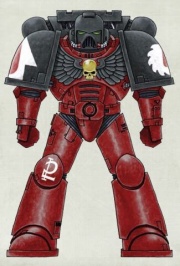 Earlier editions of the Flesh Tearers' history states that they spent thousands of years as a Crusading Chapter after their formation and that it was a Chapter Master named Amit who finally settled the chapter on the world of Cretacia.[2]

However, Amit appears as a Captain of the Blood Angels Legion in the Horus Heresy series. Amit has a vicious and savage reputation, even by the standards of the World Eaters and his oath brother, Kharn. Indeed it was during his frequent fights in the World Eaters gladiatorial pits that Amit earned his nickname the "Flesh Tearer".[12]

During the Blood Angels' assault in the Signus Cluster, Captain Amit of the Blood Angels served as captain of his personal battle barge, the Victus.[13] This battle barge would later find service in the Flesh Tearers as their only known battle barge, and is rumored to have been in their possession since the Heresy and their founding.[2] It is unknown if this is a coincidence or if there is a connection.[12]