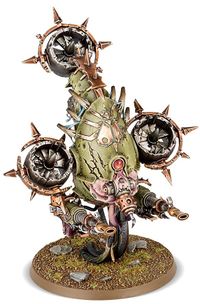 The Foetid Bloat-drone is a type of Daemon Engine of Nurgle used by the Death Guard in the closing days of the 41st Millennium. This floating engine hunts its prey with a malign intelligence.[1]

Believed to be a warped perversion of the ancient Vultarax Stratos-Automata, these foul machines are created on Nurgle-dominated Daemon worlds. Despite the costly blood sacrifices and extremely hazardous binding rituals used in their creation, Bloat-drones enjoy an enduring popularity with Chaos Lords of the Death Guard Traitor Legion, deploying them in swarms that darken the skies. This is especially true among the forces of the 5th Plague Company, with warbands such as the Sons of the Maggot, the Suppurant Sting, and the Smogrot Brotherhood fielding great numbers of Foetid Bloat-drones in varying pack strengths and configurations.[2]

The Daemons bound to Foetid Bloat-drones are more aggressive and spiteful than most Daemons of Nurgle. Some are even so wilful that they cannot be entrusted with ranged weaponry on account of their desire to smash themselves into the enemy ranks. These drones are instead fitted with the macabre devices known as Fleshmowers, which tear apart enemies caught within them at close range. The mashed remains of fleshmower victims make excellent fuel for drones armed with Plaguespitters or Heavy Blight Launchers, and so the two variants often form parasitic war packs.[2]