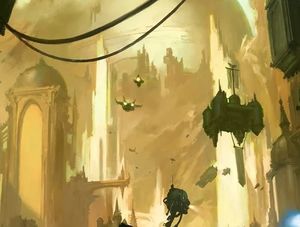 The Forbidden Fortress, with the Astronomican sitting atop its peak.[2]

Built by the Emperor at an unspecififed point in the Imperium's distant past[2], the Fortress is a remote and secret complex on Terra, built within the Himalazia mountain range. To outside appearances the mountains remain unchanged by the hand of man but in fact the Fortress extends deep down into the rock and throughout the entire mountain range. The Chamber of the Astronomican is a massive spherical chamber located within a single mountain, the peak sculpted to form the upper half of the sphere of the Chamber. Uninvited access to the Fortress is not permitted - even members of the Adeptus Arbites and the Inquisition must seek permission before they can enter. Though a thousand psykers are daily sacrificed to the Throne in order to power the Astronomican, powerful individuals such as Space Marine Librarians or Imperial Guard Sanctioned Psykers are chosen to don black robes and serve within the Fortress. In time however these too are eventually sacrificed. The Fortress itself is protected by grey-clad guardians of the Adeptus Astronomica wearing Carapace Armour and armed with Lasguns.[2]

Around the Fortress are vast city-sized emitters that transmit the power of the Astronomican across the Imperium at large. Collectively, these constructs are similar in size to the Imperial Palace itself.[1] All of this vast network of ancient but degrading technology is continually maintained by Tech-Priests of the Mechanicum and its power conduits lead all the way back to the Golden Throne within the Imperial Palace.[1] The impossibly huge cables that link the Fortress to the Palace run along a trench hundreds of kilometers deep. The trench is lined with Mechanicum equipment, gun batteries, and Void Shield arrays.[2b]

During the Noctis Aeterna and Daemonic incursion on Terra the Forbidden Fortress was assailed by the powers of the Warp. Its adepts went mad and many became possessed by Daemons. Inquisitor Erasmus Crowl and his retinue arrived into this scene of hell, shocked that one of the most vital sites of the Imperium was in total disarray. Imperial Fists reinforcements arrived shortly after, scouring the complex of its Daemonic infestation.[2a]