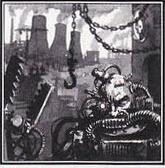 The majority of a Forge World's solid ground surface is covered in thousands of years of built-up, massive industrial complexes: great machine factories, production centres, huge volcanic furnaces, skyscraping chimneys, abyss-like quarries and the great workshop-fortresses of the Collegia Titanica. No other world can match the quality and quantity of a forge world's output.[1]

The Adeptus Mechanicus possesses a monopoly on the advanced technological knowledge of Terra's past; consequently, Forge Worlds are the sole producers of the Imperium's more unique and advanced equipment: high-end personal weapons, spacecraft, war machines such as tanks, fighters, and even Titans, as well as more mundane but vital and advanced equipment.[1] 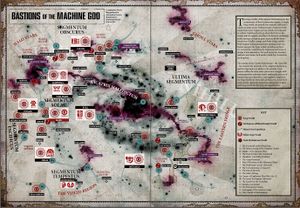 Forge Worlds across the galaxy[15]

The population of a Forge World is invariably immense, the majority directly involved in the industry of the planet, laboriously working in factories and involved in heavy mining. The result of the planet's complete industrialization means its ecosystem has been completely destroyed. The air is saturated with toxic gases and rivers flow with toxic run-off from factories. In many cases, even seas and oceans have been dried up to make room for more factories. However, the output of forge worlds is absolutely vital to the Imperium as a whole.[16]

A Forge World is directly controlled by the Adeptus Mechanicus. All are completely dedicated to the manufacture of the various machines of the Imperium, the pursuit and preservation of humanity's ancient scientific knowledge and the worship of the Machine God. Ancient pacts between the Adeptus Mechanicus and other worlds and institutions of the Imperium oblige the various Forge Worlds to supply other worlds and the various military arms of the Imperium, such as the Imperial Guard. Based on most forge worlds are the Titan Legions; these are supported by legions of Skitarii, the Mechanicus's cybernetically-enhanced soldiers, who also serve as the forge worlds' military forces. Equipment produced by forge worlds are constructed according to the individual forge world's own design-standards or "patterns".[16]