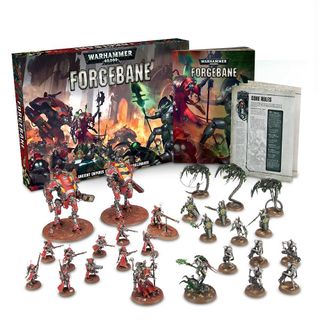 Forgebane is a starter box for the 8th Edition of Warhammer 40,000.

Across the galaxy a fresh conflict is coming to a head between man and alien – or rather between factions that once laid claim to those terms, but have become entities far stranger and more deadly than beings of flesh and blood. Battle lines are being drawn on Amontep II, a planet rich in the mysterious substance that once held the tides of the warp at bay, and a hundred worlds besides. The Adeptus Mechanicus have become aware of a strange mineral bounty that lies within their domain, and are going to extreme lengths to secure it – but the Necrons who have long slumbered under Amontep II are rising. The stage is set for a war that could define the future of the Great Rift, and perhaps even the Imperium itself...

Forgebane is a great-value boxed set containing 2 armies split across the forces of the Adeptus Mechanicus – cybernetically augmented post-human soldiers of the Machine God – and the Necrons – an ancient, slumbering civilisation of soulless automata whose rousing is changing the face of the galaxy. You can use these miniatures to act out the scenarios described in the Forgebane book – 3 connected missions that recreate the desperate battle for Amontep II – and use them to expand your games of Warhammer 40,000. Included in the box: