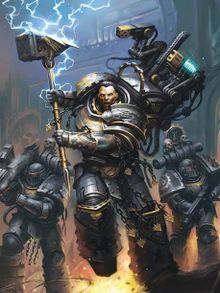 Forgebreaker was a legendary hammer forged by Fulgrim, Primarch of the Emperor's Children in a contest of smithing skill with his brother, Ferrus Manus of the Iron Hands.[Needs Citation]

Forgebreaker began as a project by Fulgrim to build the perfect weapon for his brother while the Gorgon did the same. In the end, when Fulgrim and Manus had finished their respective weapons, neither could agree on which was the best with the Phoenix claiming that Ferrus' Fireblade was the best and the Gorgon claiming that Fulgrim's Forgebreaker was, in fact, the greatest. In the end, they each gifted their weapon to each other, with Fulgrim receiving Fireblade and Ferrus receiving Forgebreaker, the start of a bond of brotherhood closer than any other two primarchs that lasted until the outbreak of the Horus Heresy.[Needs Citation]

When the Heresy began, Fulgrim was sent by Horus to use his renowned oratory skills to sway his brother to their cause. However, Ferrus remained loyal to the Emperor and denounced Fulgrim and Horus as traitors. The two brothers dueled and Fireblade was broken by Ferrus and Fulgrim stole Forgebreaker and with it, rendered his brother unconscious. The two primarchs would later meet again on Istvaan V where they once again dueled, but this was to be the last time; with Ferrus wielding the reforged Fireblade and Fulgrim wielding Forgebreaker. In the end, Fulgrim was disarmed and in his panic drew the daemonic Blade of Laeran, which provided him with the strength to strike down his beloved brother, Ferrus. Fulgrim was hesitant to deliver the killing blow until the Daemon within the blade twisted his mind into finishing the duel. Ferrus was beheaded and Fulgrim became fully possessed by the daemon within the Blade of Laeran.[Needs Citation]

The Fulgrim-Daemon later presented Horus with the head of Ferrus Manus and Forgebreaker as a sign of his loyalty. The hammer was then given to Perturabo of the Iron Warriors, who adapted it for his own use.[2]

Sometime in late M41, the hammer would find its way into the armory of the Blood Ravens Astartes chapter.[3]