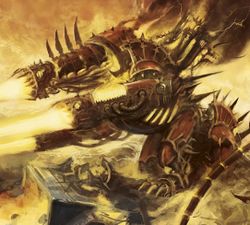 The Forgefiend is a type of Daemon Engine used by the forces of Chaos.

This disturbing fusion of Daemon-beast and heavily armoured machine is designed to attack enemy forces from afar with overwhelming firepower as opposed to its cousin, the Maulerfiend, which is designed for close combat. Upon the Forgefiend's back is a assembly of soul-furnaces which contain the tortured screams and faces of its victims.[1][2]

Forgefiends are created by either a Warpsmith or Sorcerer, who coax the spirit of a Daemon from the Warp to possesses the body of a machine, powering it with its fury.[3]

The Forgefiend is typically armed with either up to three Ectoplasma Cannons[3] (these called Cerberites by Imperium scholars)[5a] or two Hades Autocannons.[2] Forgefiends do not fire normal ammunition, for even their bullets are tainted with daemonic essence. Moreover, they can reload and create new ammunition internally by feasting upon nearby metal.[3]