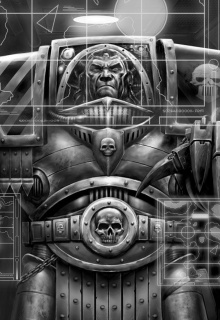 Kydomor Forrix[5a] was a Warsmith and member of the Trident, later a subordinate Captain of an Iron Warriors Grand Company under the command of the "The Warsmith" until the Siege of Hydra Cordatus.[1a]

Originally born on Terra as Kaidomo, Forrix waged the Great Crusade without his Primarch for many years. After being reunited with Perturabo, he saw Olympia as his spiritual homeworld and was soon one of the last remaining Terrans within the Iron Warriors.[5b]

Forrix eventually rose to the Trident, the inner circle of advisers to the Primarch Perturabo.[2][3a][4a] Four years after the Iron Warriors reunited with their Primarch, Forrix served during the evacuation of the planet Morningstar, working besides Ahzek Ahriman to ensure crowd control in the capital city Calaena. While there, Forrix explained that he was raised on Eite Mohr, Terra but he felt that Olympia was his true home. To him, the planet was harsh and beautiful, and it showed how insignificant the individual was compared to the universe. This poetic insight surprised Ahriman.[5]

Forrix went on to command forces during the difficult Sak'trada Deeps Campaign, secretly harboring doubts as to the operations value and the competency of Perturabo's conduct of it. He got along badly with fellow Triarch's Harkor and Golg during this time, who frequently sought to undermine his favor with the Primarch. Later during the rebellion on Olympia, Forrix fell into a deep melancholy at the atrocities the Iron Warriors were contributing but still executed Perturabo's genocidal orders. Perturabo himself soon fell into a similar melaoncholy, and during the destruction of Lochos Forrix was the first to discover the Lord of Iron in a near-catatonic state beside the corpse of his murdered foster-sister Calliphone.[6]

Shortly after, Forrix followed his Primarch into rebellion against the Emperor. During the Battle at the Phall system, Forrix had primary responsibility for planning the Iron Warriors' void attack on the Imperial Fists' Retribution Fleet marooned in the Phall system.[3b] Later, Forrix accompanied Perturabo into the Eye of Terror and led the Iron Warriors alongside Emperor's Children during the Battle of Iydris. Forrix accompanied Perturabo and Volk during the journey to Sarum and then to Deluge in order to retrieve Angron and bring him to the muster of traitor forces on Ullanor. During Horus' muster Ullanor, Forrix was assigned the duty of coordinating the massive influx of traitor forces arriving in orbit.[7] During the Solar War, Forrix was a major traitor commander who oversaw the capture of the Uranus and Jupiter regions alongside his Primarch.[8] He went on to take part in the Siege of Terra.

During the Siege, Forrix was shocked when Perturabo placed fellow Triarch Kroeger in charge of the capture of the Lion's Gate Spaceport.[9] Forrix was instead placed in charge of an infiltration operation, moving into the Spaceport under the cover of a botched offensive on its walls.[9a] Their mission was to capture the bridges linking the Lion's Gate to its spaceport, but Forrix and his men were cut off and trapped behind enemy lines for weeks. Despite their situation Kroeger offered them no support, and ultimately Forrix was the only survivor of the 1,000 Battle-Brothers under his command. The loss of his second, Gharal, particularly shook him. Moreover this sacrifice had been a mere feint by Perturabo to allow the Iron Blood to dock at the highest levels of the Space Port. Realizing his Primarch had so callously thrown away the lives of him and his men for such a thankless mission, Forrix became embittered and realized that simple warriors like him were mere insects to the Chaos Gods and their champions. Though his faith in Perturabo was broken Forrix still continued to fight on, stating he'd rather win a battle for nothing than be defeated.[9b]

Forrix later led the retreat of the Iron Warriors during the Battle of Terra[1a]. 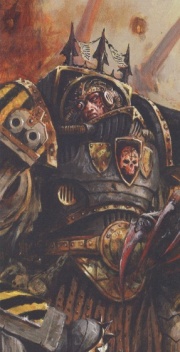 Forrix during the Horus Heresy[2]

By M41, despite his intelligence, supreme organizational skills, as well as being extremely capable in the art of siege warfare, over the millennia Forrix had grown jaded and apathetic. He was disillusioned with the Long War, and he tread the path of the heretic simply because he had none other to take. He was now just a mere Captain under the command of his former subordinate, Barban Falk, now known simply as "The Warsmith".[1b]

By the time of the Battle of Hydra Cordatus, his apathy had made him unworthy to succeed the Warsmith. Likewise, due to his fellow Captain Kroeger's descent into maddened bloodlust, leaving him unworthy to take up the mantle. Honsou, having his potential cultivated and groomed for the position, and by dint of being the surviving captain of the siege, succeeded to the office of Warsmith instead.[1c] After a number of achievements during the siege, including being responsible for having destroyed an Imperial Warhound Titan, Forrix was killed by the garrison's remaining Warhound.[1d]