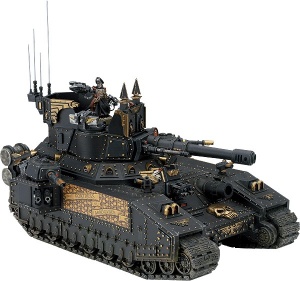 Yarrick riding the Fortress of Arrogance[1]

The Fortress of Arrogance was a Baneblade tank, noted for its use by Commissar Sebastian Yarrick.[1]

After the Second War for Armageddon, Yarrick began hunting Ghazghkull Thraka. On Golgotha, Yarrick commandeered the Baneblade super-heavy tank The Fortress of Arrogance. During the Battle of Golgotha the tank was crippled by a Stompa, and Yarrick was forced to abandon it when the Imperial forces were routed from the planet.[1]

Before the Third War, Yarrick requested that the Fortress be reclaimed from Golgotha. During Operation Thunderstorm[2], an Adeptus Mechanicus Reclamator expedition found the remnants of the venerable Baneblade, and during its voyage to Armageddon upon one of the great Mechanicus Arks, it was repaired and re-fitted. Now, Yarrick once more leads armoured assaults against the greenksin hordes from the cupola of the Fortress of Arrogance.[1]

The Fortress was refitted with an armoured cupola, giving Yarrick a "pulpit" from which to command and inspire. The turret also includes enhanced sensor and communications arrays and was repainted in the black colour of the Commissariat, with a huge skull fixed to the front of the hull.[1]