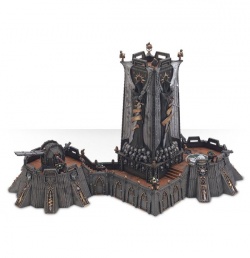 AFortress of Redemption is a type of heavy Imperial standard fortification. A Fortress of Redemption is a towering bulwark against the ravages of planetary invasion. Each is virtually impervious to conventional firepower and the lower levels, bunker annexes and sub-crypts can house entire platoons of battle-ready warriors. First used by the Dark Angels Legion during the days of the Great Crusade, they have since been used by every military force in the Imperium and proven invaluable to its defence. A Fortress of Redemption is adorned with symbols depicting angels of death and the skulls of ancient heroes. This gothic grandeur of the unyielding edifice is matched only by its uncompromising and efficient lethality. Nestled within its armoured walls, a Fortress of Redemption houses an Icarus lascannon capable of destroying enemy ships in low orbit, a missile silo and a profusion of heavy bolters to repel ground based invaders.[1]