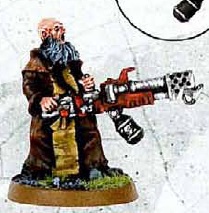 Zealot with a Flamer[3]

The Frateris Militia are masses of the faithful gathered by the Ecclesiarchy to fight Wars of Faith against enemies of the Emperor and mankind.

The Frateris Militia are the unofficial successors of the Frateris Templars, which were forcibly disbanded by order of the Decree Passive following the Reign of Blood.[1a] The existence of the Frateris Militia is tolerated due to the fact that they have no formal connection to the Ecclesiarchy: they are no more than faithful Imperial citizens eager to prove their dedication to the Imperial Cult. The raising of a Frateris Militia force is often tied to the announcement of a War of Faith, with the faithful assembling of their own volition alongside the ranks of the Imperial Guard and Adeptus Sororitas, though they can come from any number of sources: a passionate Preacher or Confessor may rouse the local citizenry to dispose of a recently-discovered heretical cult; a Missionary may acquire a following of recent converts to protect and help them spread the good word; a temple may come under attack, requiring the opening of secret vaults to arm the local clergy and lay members in the shrine's defense.[1b][1c] Zealot squads are often led by Confessor-Sergeants.[4]

In general though the clergy is wary of raising a force of Frateris Militia. Mobs of ill-trained zealous fanatics are not only hard to control but can be as much a danger to themselves as they can the enemy; they are equally liable to kill innocent civilians in their attempt to get at the foes of mankind. If the official forces of a War of Faith are defeated, the Frateris Militia often loses focus and degenerates into roving hordes of bandits who pillage and slaughter the locals. When held together by an inspirational figure though, the Frateris Militia have been known to perform courageously and with valour in situations which would make even veteran Guardsmen blanche with fear.[1b][1c]

The Crusade of the Red Redemption (or more commonly, the Redemptionists) is one of the most notorious of these extreme religious sects. Their creed is one of violence, paranoia and xenophobia, seeing humans as inherent sinners, unless proven otherwise. As a militant sect, they frequently gather to fight wars of faith.[Needs Citation]

It is known that the Ordo Hereticus monitors the activities of the Frateris Militia in order to ensure that they follow the spirit of the Decree Passive whilst making sure that the prohibitions remain in force.[2]

Frateris Militia bands were available to second edition Sisters of Battle armies. In fourth edition they were reincarnated as "Zealots" for Witch Hunter armies.[Needs Citation]