Fulgrim: The Palatine Phoenix is a novel by Josh Reynolds. It is the sixth book of The Primarchs series.

Lord of Chemos and bearer of the Palatine Aquila, Fulgrim, primarch of the Emperor's Children, is determined to take his rightful place in the Great Crusade, whatever the cost. A swordsman without equal, the Phoenician has long studied the art of war and grows impatient to put his skills, and those of his loyal followers, to a true test. Now, accompanied by only seven of his finest warriors, he seeks to bring a rebellious world into compliance, by any means necessary. But Fulgrim soon learns that no victory come without cost, and the greater the triumph, the greater the price one must pay... 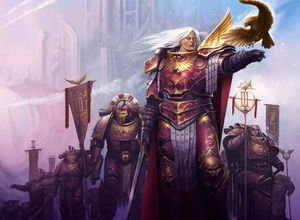