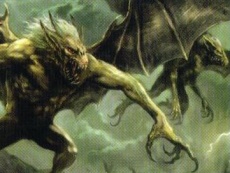 Furies attack from the skies.

Despite their insignificant status among Daemons, Furies are dangerous predators in their own right. Their leathery wings enable them to strike swiftly, giving them an advantage over many other Lesser Daemons and Daemonic Beasts.

It is said that Furies are formed from the souls of mortals who preferred to use Chaos for their own gain rather than seeking the patronage of a Chaos God. Without a deity to claim their souls, they are unable to enter a god's realm and thus forced to spend their existence drifting aimlessly through the warp, exposed to its unpredictable nature. The only respite from their fate is daemonic incursions which allow them to escape into real space and vent their wrath upon an unfortunate mortal.[1]

Furis have also been described as barely sentient, having been formed by the accretion of warp energy around a fleeting emotion. Their mindless nature allows the Chaos powers to enslave them with ease, and Furies thus subjugated vary in appearance to reflect their new-found patron.[2]

They are often enslaved and used as hunting beasts by Raptor Cults, particularly the ones of the Night Lords Legion, who shun daemonic pacts.[3]