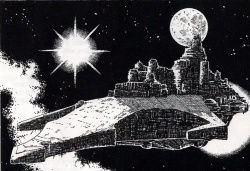 "Abyss" from Space Fleet, the claimed inspiration for the Furious Abyss

The Furious Abyss was a massive starship constructed during the latter years of the Great Crusade.[1]

Originally thought to be the sole ship of its class, it is eventually revealed by Lorgar that two more of the massive ships, the Trisagion and Blessed Lady, were constructed. Upon their completion the Abyss Class Battleships were the largest and most powerful ships in the Imperium, rivaled only by the Phalanx.[2]

The vessel was a unique configuration within the Imperium at the time and were quite large with even Emperor and Gloriana Battleships being dwarfed by these massive vessels.[2] It was roughly shaped like a sword with three points sticking out from the vessel like a trident. These ships were more akin to floating cities then battleships and a noted appearance was a large open golden book present on its hull. The command throne was on a raised dais with numerous screens present allowing its commander to control the entire vessel. The ship carried a complement of fighters, even though it did not look like it had any launch bays.[1]

The nature of the ship meant that many did not think it was capable of carrying fighters but these individuals were often surprisingly mistaken when the ship launched its compliment of fighters from its hanger bay.[1]

The Abyss contained the first prototype plasma lance, which was capable of destroying other ships in close combat. It was also capable of being equipped with psionic charges which were able to be deployed in the Warp and disrupt the senses of a Navigator.[1]

The starship was created secretly by a branch of the Adeptus Mechanicus who held loyalties to Warmaster Horus during the early start of the Horus Heresy. It was made at the shipyard moon of Thule and given as a gift to the Word Bearers Adeptus Astartes, who were serving their Primarch in their plan to assault the loyalist Legions that would serve the Emperor. After the commemoration ceremony, the shipyard was destroyed, killing all the workers and allowing the ship's existence to remain a secret as its design was unknown to everyone outside its construction.[1]

The detachment of Word Bearers in command of the vessel was led by Fleet-Captain Zadkiel, who was given the task by Kor Phaeron to take the ship to Macragge and destroy the planet in order to create havoc among the Ultramarines. During its flight through space to its destination, it was detected by the Fist of Macragge and the Ultramarine vessel was used as target practice and destroyed by the Furious Abyss as it continued its journey. However, the distress signal from the ship's Astropaths was sent to an Imperial outpost and received by Captain Lysimachus Cestus, who led a group of Ultramarines, World Eaters, Space Wolves and Thousand Sons to investigate the message.[1]

The fleet made its way and caught up with the Furious Abyss and learnt it was commanded by the Word Bearers. Confused, the loyalists contacted the ship but did not receive a response. Zadkiel instead contacted the commander of the Waning Moon, Mhotep, in order to secure his allegiance to Horus's side. However, Mhotep decided to warn his comrades leading to a fight between the squadron and the Furious Abyss which was no contest for the large vessel. It destroyed numerous escorts and the Waning Moon before entering the Warp in order to reach Macragge. As it did so, it deployed a Psionic mine into the Empyrean in order to disrupt any following ships' Navigators and their ability to travel through the warp.[1]