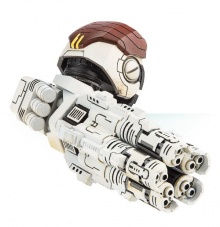 The Fusion Eradicator is a Tau Fusion Weapon.[1]

Designed as a radical solution to the limitations of current Tau fusion weapons technology, the Fusion Eradicator combines a battery of multiple synchronised firing chambers. The weapon creates a blast of energy so potent that solid matter caught in its path is torn apart at a molecular level by brute thermal force, and no physical material yet known to the Tau can survive its destructive power. The cost in materials and expertise to create a single Fusion Eradicator is immense, and the natural endurance of each weapon is limited often to a single battle. Each Fusion Eradicator is then discarded and must be replaced.[1]

The Fusion Eradicator is most commonly mounted on the Tau KX139 Ta'unar Battlesuit.[1]