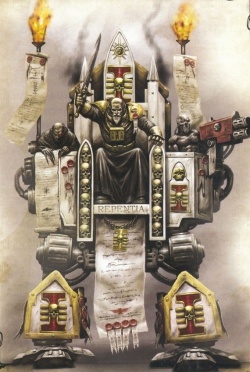 Inquisitor Lord Fyodor Karamazov on his Throne of Judgement

Fyodor Karamazov, also known as the Pyrophant Judge of Salem Proctor, is an Inquisitor Lord of the Ordo Hereticus.

A staunch Amalathian, Karamazov is bitterly opposed to the notion of change, believing that the Emperor's plan for His people must be left to unfold as He planned and without the arrogant intervention of those who believe that they understand His will. He is a harsh judge and brooks no pleas of innocence, once famously boasting that he has sent more witches and heretics to their deaths than Macharius.

Karamazov has risen steadily in the Ordo Hereticus for decades, acquiring many supporters within the more hard-line Puritan elements of the Inquisition for his unflinching determination to punish witchcraft and heresy without mercy. His deeds were repute with the rigid application of the Imperial Creed and, though some within the Inquisition criticised his inflexibility and claimed that he had sent thousands of innocents to their deaths, Karamazov would reply with Judge Traggat's famous maxim that "claims of innocence meant nothing; serving only to prove a foolish lack of caution." His purges have become infamous, particularly those carried out on Ultima Macharia, Bakka, and Cypra Mundi. After the Abraxan Purges of 930.M41 he was presented with his mighty Throne of Judgement, which has become a symbol of his power and prestige.[2]

Karamazov's reputation as a ruthless, unforgiving Witch Hunter was already well known throughout Segmentum Solar when he famously clashed with Ecclesiarch Decius XXIII concerning Karamazov's excruciation and eventual immolation of a young preacher from the world of Salem Proctor in 945.M41. This world had broken faith with the Ecclesiarchy, its apostate cardinal turning the world's resources to his own ends and casting out all who defied him. Inquisitor Lord Karamazov led a fleet, together with two entire orders of the Adepta Sororitas, to depose the apostate cardinal, but upon its arrival, he found the world already in rebellion against its traitorous ruler.

A lowly preacher named Icarael led the revolt of the populace of Salem Proctor against the traitor cardinal and together with the Inquisition's forces, defeated his armies and cast him from the burning ruins of his cathedral. None who met the young man could fail to be moved by his simple eloquence, his devotion to the Emperor, or his humility. To some, his incredible rallying of a planet was proof that Icarael was divinely guided and that the light of the Emperor moved within him. It did not take long before Inquisitors of the Thorian faction heard of this incredible young cleric and, feverish with the prospect of discovering a potential vessel of the Emperor's spirit, they set out for Salem Proctor. However, Inquisitor Lord Fyodor Karamazov, marching over the charred bones of heretics in his monstrous Throne of Judgement, had other ideas.

Before the Thorian Inquisitors arrived, Karamanov arrested Icarael, taking him to the Inquisition fortress of Serevian and placing him in the Chamber of Truth and Penitence. For six months, Karamazov subjected Icarael to all the torments and theological arguments at his disposal, ignoring the repeated demands of other Inquisitors and members of the Ecclesiarchy who wished to see Icarael. Ecclesiarch Decius XXIII petitioned the Masters of the Inquisition to have Icarael released, and other Inquisitors mobilised local forces and prepared to lay siege to Severian if they were not granted access to the preacher, but by then it was too late. Karamazov had already declared Icarael a false prophet of the Emperor and sentenced him to death. His charred remains were delivered to the Ecclesiarchy for interment and Karamazov returned to his duties. The Ecclesiarchy called for his immediate arrest and examination, but when the taint of Chaos was later uncovered on Salem Proctor among those who had followed the teachings of Icarael, Karamazov was vindicated in the most public way possible. Despite this, Karamazov had earned the undying enmity of the Ecclesiarchy and the Thorian faction of the Inquisition.[1]