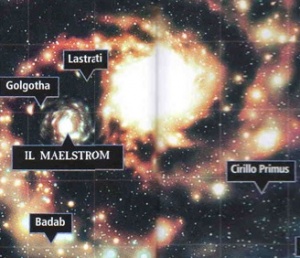 The Galactic Core is the center of The Galaxy and the homeland of the Leagues of Votann.[1][5]

A vast stellar mass of mostly uncharted stars and planets, the Galactic Core's worlds are known to be phenomenally rich in not only stars but rare resources, but is dangerously unpredictable. The region suffers from frequent ionic reefs, null-zones, supermassive blackholes, extremely radiation, sentient nebulae, and nomadic singularities that make Warp travel hazardous. So dense is the makeup of stars in this region is many worlds of the Core never experience the darkness of night and are instead perpetually bombarded to a wide array of esoteric energies. Due to strange interactions between stellar bodies, these regions are subjected to massive gravitational forces.

Despite the hazards of this region, many species have managed to thrive within its boundaries. Most notable amongst these is the Kin of the Leagues of Votann. The Core is home to the vast majority of Leagues civilization and all of their ancient Holds. It is thanks to the Cloneskein biological templates of the ancient First Ancestors that the Kin have been able to adapt themselves to survival in this harsh region. The Kin are not alone in this region, and large numbers of Orks as well as other lesser species have managed to establish themselves in the Galactic Core.[5]

Occasionally, planets will move out of the Galactic Core, often into the Maelstrom Zone, where the Imperium can finally access the core's much-coveted rare minerals and isotopes.[1] Inside the Galactic Core is a nebula known as The Cradle, a rich source of precious metals, ores, and energy. Human Pirates, are also active in this region of space.[2]

The Galactic Core has become the region of the Galaxy most heavily affected by the formation of the Great Rift. It is now utterly consumed by Warp Rifts and the Imperium is unsure if anything within it can even survive.[4]