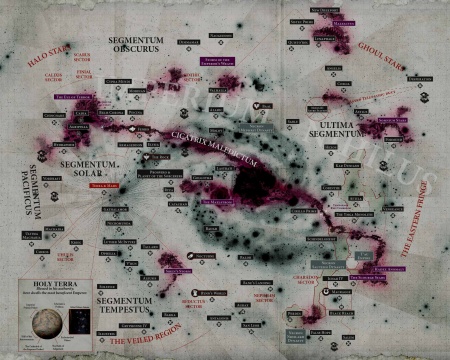 A distant view of the Galaxy[7c]

Billions of years old, the earliest known sentient race in the galaxy were the Old Ones. Mastering advanced technologies derived from the Warp and creating the Webway, they soon established an empire across the whole galaxy. They believed that all life was useful and they are known to had brought about the rise of numerous new species, such as humanity, as well as impregnated thousands of worlds which they made their own.[7b] The Old Ones soon came into contact with vampire incorporeal beings which fed on the energy of stars known as C'tan. The Old Ones battled the C'tan, forcing them into hiding.[8] At some point, the Old Ones came into conflict with the Necrontyr, a race of highly advanced but short-lived beings. The two civilizations eventually clashed in a massive galaxy-spanning conflict known as the War in Heaven which the Old Ones were winning until the Necrontyr turned to the C'tan in desperation, converting themselves into the mechanical Necrons. This time, the conflict was far different from the previous wars as the Old Ones mastery of the Warp was now countered by the C'tan's supremacy of the material universe. In time, the C'tan began to dominate the galaxy whilst the Old Ones bastions were besieged and their nurtured races being fed upon like cattle by the eternal hunger of the star-gods. Entire worlds were razed, suns extinguished and entire star systems devoured whole by the terrible C'tan. In desperation the Old Ones sired new races to fight the Necrons and C'tan such as the Eldar and Orks.[7b] However this still did not prove enough and slowly the Old Ones were broken, scattered, and finally annihilated by the Necrons and C'tan.[8] In the power vacuum following the war, the lesser creations of the Old Ones such as Mankind were known to had continued to develop but in unforseen ways.[7a] The mantle of galactic dominion would eventually pass to the Eldar who had fought alongside the Old Ones during the war. Exhausted from the War in Heaven, the Necrons departed into the Great Sleep on their Tomb Worlds in order to rebuild their strength and take control of the galaxy once more. Shortly before the Great Sleep the Necron Silent King, Szarekh, engineered a betrayal of the C'tan. The star-gods were shattered and enslaved by the Necrons and Szarekh went into self-imposed exile outside of the Galaxy.[8]

With the Necrons in hidden hibernation, the Eldar rose to the position as the masters of the Galaxy. Creating a vast empire and utilizing the Webway for travel, the Eldar Empire and its advanced technology flourished for millennia. However the Eldar were not the only major galactic power at this time. Humanity was eventually able to utilize Warp Drives and Navigators to finally leave the Sol System to colonize a large part of the Galaxy during a period that would become known as the Dark Age of Technology. Ultimately, this first interstellar empire of Humanity would collapse after a series of disasters that included a devastating machine uprising, Warp Storms, and the sudden appearance of large amounts of Psykers. In the subsequent Age of Strife most of humanity's domains regressed and the species seemed doomed.[2e]

Meanwhile, the Eldar Empire grew increasingly hedonistic, arrogant, and cruel. As the depravity of the Eldar grew, their psychic resonance was giving birth to a new God of Chaos. When this being of pure desire, Slaanesh, exploded into life the psychic backlash decimated the Eldar race and empire. The souls of billions of Eldar and most of their Gods were consumed by Slaanesh and a massive Warp Rift was created in the epicenter of the Eldar portal. This rift has since become known as the Eye of Terror. Only a small portion of the Eldar race survived the birth of Slaanesh, mainly those on Craftworlds or Exodite Worlds as well as their dark kin which resided in the Webway.[3]

Around the time of the Fall of the Eldar in M30, humanity's homeworld of Terra had recovered from the Age of Strife and united once more under the Emperor of Mankind. Forming the Imperium of Man, the Emperor and his offspring, the Primarchs, embarked on the Great Crusade. The Crusade succeeded in uniting thousands of human worlds which had become lost and isolated during the Age of Strife and mankind rose to become the Galaxy's largest single empire. However the events of the Horus Heresy forced the Emperor's remain to be forever shackled to the Golden Throne and over the next ten thousand years the Imperium would become increasingly theocratic and fall into a state of decay.[2a][9]

Nonetheless for the last ten thousand years the Imperium has endured, battling not only Xenos races but also the forces of Chaos. The Orks have risen to become the most numerous of the Galaxy.[2j] Meanwhile, newer and more dynamic civilizations such as the Tau Empire would develop and the Necrons slowly began to reawaken from the Great Sleep.[2m] The Galaxy would face a new and grave threat at the close of M41 when the Tyranids, a ravenous race seeking to devour all organic life, finally arrived in The Galaxy to begin their feast.[10]

After the Thirteenth Black Crusade, the Warp was thrown into such turmoil that much of the Galaxy was effectively split in two by a disturbance known as the Great Rift.[Needs Citation] 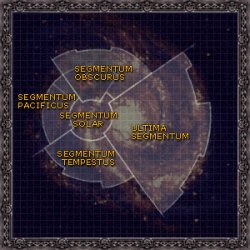 The Imperium is the largest empire in the Galaxy, centred around Terra in the galactic west, consisting of at least a million worlds which are dispersed throughout the entire Galaxy. Space ruled by the Imperium is divided into five fleet zones, known as Segmentums:

Space is then further divided into Sectors, which typically cover seven million cubic light years equivalent a cube with sides almost 200 light years long; Sub-sectors, which usually comprise between two and eight star systems within a ten light year radius; and systems [1c]. Imperial planets are categorised into several broad classes according to their function, type of civilisation and technological level.[12b]

There remain vast areas, in fact the majority of the stars in the Galaxy, that are unexplored, uninhabited, inaccessible by the Warp, or are controlled by alien empires. These areas are known by various names including wilderness space or wilderness zones.[1a]

The Fringes surround the galaxy and are outside the light of the Astronomican and so beyond easy reach of the Imperium. They are known to contain human planets settled in ancient times as well as many alien worlds.[1a] The Eastern Fringe is the largest fringe area located to the far galactic east boarding the Ultima Segmentum.[Needs Citation]

Beyond the Fringes lie the Halo Stars — very ancient stars ringing the Galaxy, the majority almost extinguished and circled by long-dead worlds.[1a]

The forces of the Imperium are recruited from and posted to defend the many worlds of the Imperium. The immense armies of Imperial Guard are recruited from every single Imperial planet and regiments are shipped across the Galaxy to the frontlines of warzones [2g]. The elite Space Marines typically operate from a Chapter Planet, although some Chapters maintain their base on space-bound fleets, space stations or asteroids [2f]. The Imperium can also call upon the pious warriors of the Adepta Sororitas[2d], the fleets of the Imperial Navy[2b], and the mighty god-machines of the Collegia Titanica[2e] to come to its defense.

The forces of Chaos such as the mighty Chaos Space Marine Legions keep hidden lairs within Warp storms, notably the Eye of Terror. Warbands exist on ships hiding in the wilderness zones between Imperial sectors or on hidden bases.[2h] The Lost and the Damned can emerge from fallen Imperial forces to plague the Galaxy. Chaos Daemons exist in the Warp but are capable of invading realspace through means such as breaking through the tear in realities opened by the unprotected mind of a psyker, or being ritually summoned by followers of Chaos [2i].

The Eldar, whose Empire once spanned the Galaxy, survive mostly on vast ships known as Craftworlds. A Craftworld contains Webway gates which connect to other Craftworlds or to hidden gates throughout the Galaxy, providing a means for their war parties or spacecraft to travel the Galaxy. A minority of Eldar also inhabit Exodite Worlds or Maiden Worlds, wander the Galaxy as Eldar Outcasts or Corsairs, or travel the Webway as part of the Harlequins.[3] 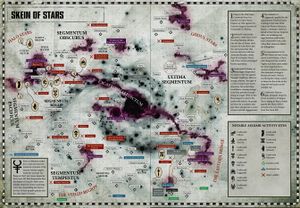 The Dark Eldar live in Commorragh, a city located within the labyrinth of the Webway, with hidden Webway gates leading to points all across the the Galaxy, allowing them to emerge and strike from seemingly nowhere and vanish again before any significant resistance can be mobilised.[Needs Citation] 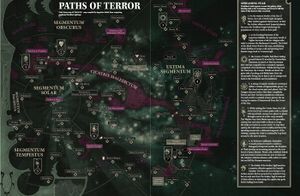 Necrons are scattered all throughout the galaxy, awakening from Tomb Worlds where they were buried in stasis for centuries. They are finding the Galaxy a changed place, infested with younger races to be harvested.[2n] 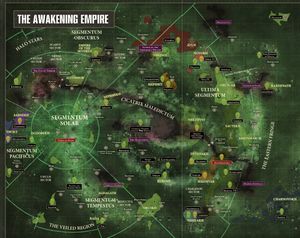 Orks are spread everywhere throughout the Galaxy, in fact possibly outnumbering every other race. However due to their aggressive and warlike nature, the Ork race wars amongst itself and is split into hundreds of tiny empires. Only when a great Waaagh! is called do an uncountable number of Orks unite and channel their need for battle towards conquering planets, systems and other races.[2j] 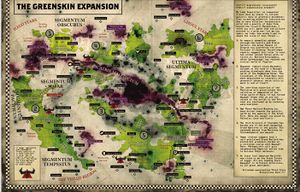 The Tau control an upstart Empire located near the Eastern Fringe and are now expanding across the galaxy thanks to the Startide Nexus, bringing them into conflict with the Imperium and other races.[2l] 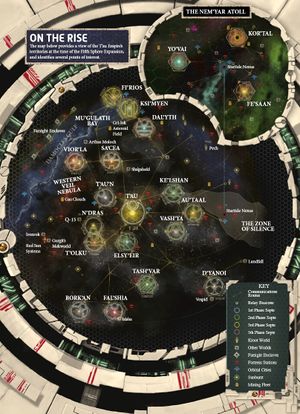 The Tyranids are invading the Galaxy from beyond its borders, the majority of Hive Fleets having attacked from the Eastern Fringe. Though new Hive Fleets are emerging from the galactic north and south, most notably Hive Fleet Leviathan.[2k] Tyranid forces also include deadly Genestealer Cults.

The Leagues of Votann are a Abhuman race likely originating from pre-Imperial Terra which settled the Galactic Core in the distant past. Largely keeping to themselves within their fabulously wealthy realm, the Great Rift has finally forced them to come into frequent contact with other civilizations.[18]

The Ulumeathic League, Church of Dracolith, Draxian Hegemony, and Reek Worldweave are other emerging alien empires which are beginning to challenge the might of the Imperium[2c] while Hrud migrations are a constant bane to any civilization.[4]

The Slaugth sport extremely advanced technology, even compared to the Eldar, and are currently infiltrating the Calixis Sector. They are able to disguise as humans, but most of the time they use human agents, bribed or threatened into service. Their long-term goal is to gain political influence and then to conquer the Calixis Sector by military means. Then they could openly feast on the human populations there.[5][6]

There are dozens, if not hundreds of minor alien civilizations in the Galaxy.[2c]

Inter-stellar travel around the galaxy is dependent on Warp jumps, a form of faster-than-light travel by means of entering the warp, a parallel psychic dimension, and re-emerging to a new location in real space light years away from the starting position.[1b]

The distances between galaxies are so vast as to make inter-galactic travel unfeasible even with advanced warp jumps. Being thrown drastically off-course by a Warp storm can result in emerging outside of the galaxy, or stepping through an ancient portal of the Webway.[Needs Citation]

The Imperium has no established presence outside the galaxy. Although, it is known that alien life exists out there - the Tyranids come from somewhere beyond the galaxy.[Needs Citation]

It appears to be inspired by the real life Milky Way galaxy, as it shares the same shape of a spiral and the same location of Earth (Terra) as the real Milky Way galaxy, as well as the same general configuration of planets and moons in the Solar/Sol system. Additionally, the real-life star Proxima Centauri has been referenced in in-universe material[11]. However, the majority of official depictions do not have the central galactic bar that the real Milky Way is thought to have, nor the same number of arms.