From Warhammer 40k - Lexicanum
(Redirected from Galaxy in Flames)
Jump to: navigation, search 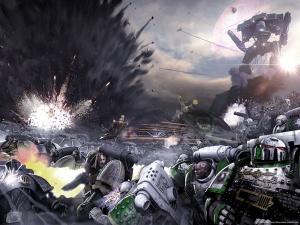 Galaxy In Flames is a novel by Ben Counter and a third book in the Horus Heresy Series. The third installment of the trilogy showing Horus's fall to Chaos, focuses on the tragic events on Isstvan III, where the loyalist factions of the Traitor Legions were slaughtered with the use of Virus bombs deployed by Horus's fleet. It is the announcement to the galaxy of the fall of Horus and the beginning of the Horus Heresy.

The novel was first published in October 2006. Each print run has a different colour for the titles: First was gold, second in silver and third in bronze. It was later included in "The Novels: Volume 1" eBook collection, and it was included as part of the Crusade's End omnibus, released in paperback on March 8, 2016.

Having recovered from his grievous injuries, Warmaster Horus leads the triumphant Imperial forces against the rebel world of Isstvan III. Though the rebels are swiftly crushed, Horus's treachery is finally revealed when the planet is razed by virus bombs and Space Marines turn on their battle-brothers in the most bitter struggle imaginable.

Warmaster Horus has fallen to Chaos, but his plans of rebellion against the Emperor are known only to a few he trusts to side with him. Primarchs Angron, Mortarion and Fulgrim of the World Eaters, Death Guard and Emperor's Children respectively have all sided with Horus and their four Legions gather in the Isstvan system on the pretence of crushing a rebellion by the Isstvanians. The unconscious Euphrati Keeler has developed a cult following who believe the Emperor is a deity and she is a saint, Kyril Sindermann chief among them. Horus questions Chief Astropath Ing Mae Sing about the saint and afterwards Sing sends a psychic warning to Sindermann, who recruits Titus Cassar of the Legio Mortis Titan Legion and his reluctant friend Jonah Aruken to help him save her. Aruken, Cassar and Sindermann go to rescue Keeler, only to find Maggard, former bodyguard of remembrancer Petronella Vivar turned genetically-enhanced enforcer for Horus, about to kill her. Maggard attacks them but becomes unable to move, the bullets from his gun moving very slowly, and the three men realize that Keeler has awoken and is using her powers to save herself and them. Before Maggard can stop them they carry Keeler to safety amidst the bowels of the Vengeful Spirit's lower decks. Horus sacrifices Sing in order to facilitate an audience with Chaos as revenge for sending the warning.

The Emperor's Children and Death Guard attack an enemy station on Isstvan Extremis where they discover a Warsinger leading the defenders. Death Guard Captain Nathaniel Garro is badly wounded by the Warsinger's sonic power but Lord Commander Eidolon is able to kill it with his own sonic shriek. This arouses the suspicion of Saul Tarvitz, who questions Eidolon about it and is taken to Apothecary Fabius's laboratory where he is shown the many surgical enhancements Fabius is making on legion members and offered a place in the new order. Horrified by Fabius's experiments, Tarvitz rejects the offer and leaves. An assault force containing elements of all four legions chosen by Horus and including Garviel Loken, Tarik Torgaddon and Lucius descends on Isstvan III's capital city and battle breaks out.

Suspicious at the hand-picked nature of the assault force, Tarvitz talks his way into remaining in the fleet when the assault force deploys and investigates the gun decks, where he discovers the ship's crew loading lethal virus bombs into the ship's guns. Realizing that the marines deployed to the surface are about to be betrayed and wiped out, Tarvitz steals a Thunderhawk and flies for the surface to warn them. He is pursued by members of his own legion who are part of the betrayal and in desperation puts himself at the mercy of Nathaniel Garro, who is excluded from the assault force and relegated to commanding the frigate Eisenstein due to his injuries. Garro, an old friend of Tarvitz's, believes him when he tells him of the imminent betrayal and orders the Eisenstein to fire on the Thunderhawks pursuing Tarvitz. The resulting cloud of debris hides Tarvitz from the fleet's sensors as he lands on Isstvan, Garro reporting that Tarvitz is dead before preparing to jump to the Warp and bring warning of Horus's betrayal to the Emperor.

On the surface the Sons of Horus, World Eaters, Emperor's Children and Death Guard whom their primarchs deemed too loyal to the Emperor to rebel against him battle the rebel Isstvanians. The Sons of Horus' drop pods scatter throughout the target area and they struggle to link up and capture their objective, the Sirenhold. Lucius leads the Emperor's Children half of the attack on the Precentor's Palace while the World Eaters under Captain Ehrlen become bogged down massacring fanatical citizens in a plaza to the north and the Death Guard advance through the city's defensive trenchworks. Lucius succeeds in killing the rebel governor Vardus Praal and the Emperor's Children capture the palace. Tarvitz then arrives and warns them of their imminent betrayal, tasking Lucius with transmitting a warning to the Sons of Horus and Death Guard while he goes to warn the World Eaters. Awakened screaming by a premonition of the virus strike, Euphrati Keeler transmits the vision to Sindermann and Mersadie Oliton, who realise the betrayal that is about to take place. The majority of the Emperor's Children and Sons of Horus are able to take shelter beneath the palace in time, but few of the World Eaters or Death Guard reach the shelter of bunkers and more are killed when Horus follows up the virus-bombs with an orbital strike that ignites all the gas in the atmosphere, burning the entire planet. Crewing the Dies Irae in support of the Death Guard Jonah Aruken and Titus Cassar hear the command to power down and seal their machine, their princeps Esau Turnet being loyal to Horus and so having received warning. Cassar realizes the truth after they ride out the virus strike and firestorm and attacks Turnet, pleading with Aruken to help him, but his insistence that the Emperor is a god alienates Aruken who does not believe and chooses ambition over friendship, shooting Cassar dead. In the fleet Horus gathers the remembrancers from the Vengeful Spirit and shows them the bombing before ordering his men to open fire, massacring them. Kyril Sindermann and Mersadie Oliton escape alongside Euphrati Keeler when she leads them to Iacton Qruze, the Sons of Horus' elderly and often dismissed third captain, who leads them away from the massacre. The four arrive at the Vengeful Spirit's hangar and plan to steal a Thunderhawk but are intercepted by Maggard. Qruze and Maggard fight but are evenly matched until Sindermann picks up Maggard's dropped pistol and shoots him in the side, allowing Qruze to finish him off. The four steal a Thunderhawk and flee, guided by Keeler to the Eisenstein where Nathaniel Garro takes them aboard.

Infuriated by the survival of the loyalists on the surface, Angron spearheads a World Eaters' attack wave to destroy them without waiting for Horus's orders. Angron and his traitor World Eaters assault their loyalist counterparts and Tarvitz flees on Ehrlen's orders to take command of the other survivors. Forced to support Angron Horus deploys the traitor Emperor's Children and Death Guard, turning what was meant to be a single wipeout blow from orbit into a protracted ground war. Tarvitz emerges as a brilliant leader, commanding the loyalists as they repel wave after wave of traitor attacks while slowly being whittled down. Frustrated and jealous that Tarvitz is getting all the glory Lucius slays traitor Emperor's Children Chaplain Charmosian and uses his helmet microphone to contact Eidolon, selling out the loyalists in exchange for a place among the traitors. Horus commits the Sons of Horus under Serghar Targost and Luc Sedirae to the battle while sending Ezekyle Abaddon and Horus Aximand to confront their former Mournival brothers Loken and Torgaddon. Eidolon launches a devastating attack, penetrating the palace where he massacres the loyalist wounded. Receiving word of Abaddon and Aximand's arrival Loken and Torgaddon leave the palace, Loken being attacked by Kharn until a Sons of Horus' tank drives over them and impales Kharn on its dozer blades. Tarvitz finds Lucius among the corpses of loyalist Emperor's Children and discovers his betrayal. The pair fight, and Tarvitz is hopelessly outmatched until he copies something Loken once did when fighting Lucius in the practice cages and drops his weapon in favour of punching Lucius in the face. A squad of loyalists arrive and open fire on Lucius, but he manages to escape. Leading the surviving loyalists he pulled out of the fight, Tarvitz takes advantage of Eidolon's undisciplined attack and manages to repel the assault.

Loken and Torgaddon confront Abaddon and Aximand in the ruins of the city's parliament building. The confrontation splits into two duels as Loken fights Abaddon and Torgaddon fights Aximand. Outclassed against Abaddon Loken knows he needs Torgaddon's help to win, but Aximand kills Torgaddon, leaving Loken helpless. Abaddon grievously wounds him, but before he can finish Loken off the Dies Irae steps on the building and brings the roof down. Abaddon pulls Aximand from the rubble, noting his sorrow at murdering Torgaddon, and believing Loken dead they return to the fleet. With the loyalists all but destroyed the traitors fall back and Horus firebombs the city from orbit, Tarvitz and the scant few survivors bracing for the end knowing that they hurt the traitors and bought time for Garro to reach Terra. Buried beneath the rubble of the parliament building, the last thing that Loken sees is the bombs falling towards him.