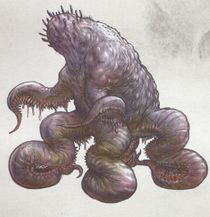 The Galgs originate from the planet of Adummin, now incorporated into the T'au Empire.[2] They were not particularly warlike and not too advanced technically,[1] yet had effectively created a paradise on their world which did not know suffering. The Galgs spent thousands of years in this state, lacking for nothing in their underground palace-cities. Their only fear was for the "Maku", a species whom they believed lived even deeper on Adummin; Galg lore claimed that any Galg who lived an unworthy life would become a "Maku" after death.[2]

The Galgs' history greatly changed, however, when they encountered the T'au. According to some tellings of the events, the Galgs joined the T'au willingly, happy to give up their lives of pleasure seeking to be given purpose within the Greater Good.[2] Other sources however say that the Galgs were conquered or coerced to join the T'au some centuries before the end of M41.[1] Both accounts have been given credence by independent Galg mercenaries who roam the wider Galaxy since Adummin's integration into the T'au Empire. Some Galgs state that the T'au gave their species new purpose and prevented them from wasting their potential,[2] but others have organized as "freedom fighters" to overthrow T'au rule.[3a] This suggests that the encounter with the T'au was accompanied by a split of the Galg species into opposing factions.[2][3a]

Galg freedom fighters joined the Alpha Legion's Sons of the Hydra in their campaign to eradicate the Ultramarines' Successor Chapters guarding the rimward edge of the Maelstrom in late M41.[3a] They took part in the successful ground assault against the Marines Mordant's Fortress-Monastery the Bas-Silica on Vitrea Mundi.[3a] Here they fought alongside the Tarellians, Morralians, Fra'al, Sslyth, and Eldar Outcasts, and were united with them by a shared seething hatred of humanity.[3a] The use of different species was chosen to provide maximum strategic flexibility, and their extremely varied combat styles made them very difficult for even the Marines' Veterans to defend against.[3a][3b] Other Galgs have ventured to Precipice and the Seventh Blackstone Fortress where they work as mercenaries.[2]

The Galgs are a race whose individuals resemble a mass of tentacles with a bulbous head.[2] They are also described as having six tentacle limbs instead of arms or legs and no head, but clusters of eye-like organs that "wave like grass in a breeze".[1]

Young Galgs produce an oily secretion that is drunk by the Dark Eldar, giving an invigorating effect and occasional hallucinations.[4]

When fighting in close quarters, Galgs have been known to latch onto an enemy's back and wrap their tentacles around the opponent's throat.[1]

The Galg use sonic weaponry.[2]

In Sons of the Hydra, Quetzel Carthach was said to have included xenos in his close circle of advisors.[3a] While Omizhar Vohk is the only confirmed advisor, Galgs or members of the other xenos mercenaries Carthach used may have been included among them.