Ork Gargants are the largest land-based Ork fighting machines. Effigies of the Ork Gods Gork and Mork, these towering War Engines compare in size and power to Imperial Titans, dominating the battlefield with fearsome firepower. They are constructed by a prospecting Warboss, who is visited by dreams of massive mayhem and carnage, or by orks he has bullied into doing it. This drives the Orks into a frenzy and effectively begins the Warboss' prospective Waaagh![1]

Not as technologically advanced as their Imperial and Eldar counterparts, Gargants are still fully capable of destroying the Titans of other races. Like many products of Orkoid military engineering, the Gargant relies on a combination of comparatively simple technology and devastating heavy firepower, an attitude summed up by Boss-Mek Badlug One-Leg in his oft-quoted dictum "S'gorra be dead shooty, wiv loadza gunz all over."[6]

Ork Gargants do not have sophisticated mind impulse units like Human and Eldar Titans. Instead, the Gargant's Kaptin must rely on bellowing his orders down a speaking tube so that his officers will move the Gargant and fire its weapons as he wishes. Repair crews are composed of Gretchin, whose small build suits them to crawling through cramped spaces armed with wrenches and oily rags[6] 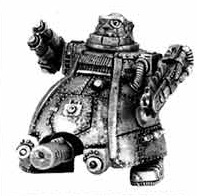 Gargants have a special weapon location known as a "belly gun", which houses either a Gut Buster mega-cannon or a Snapper close assault weapon. The Smasher variant of the Gargant uses a Gut Buster while the Crusher employs a Snapper. The Snapper, like the Gut Buster, is a uniquely Ork weapon, and is actually two weapons in one, consisting of a pair of spiked metal jaws used in close combat, and a large melta-gun with a limited range. Snappers are powerful enough to bite through the armour of Titans, amputating legs[6]. Other primary weapons can include a Buzz Saw Arm, Ripper Fist, Supa Lifta Droppa, Cluster Buster, and Splasha Attack Gun.[6][7]

A "standard" bipedal Gargant is normally around the height of a four-story building, if that building had several large guns and Kustom Force Fields bolted onto it. A typical Ork Gargant (if there can be such a thing) may field 2 or 3 Soopaguns - Titan-Killer equivalent ballistic weapons. It may also sport a small number of additional weapons, likely built into the chest or head sections. A massive Titan close-combat weapon may also be featured, likely a Mega-Choppa. Gargants with such choppy attachments are sometimes referred to as Slasherz or Slasher-Gargants[6]

War of the Beast

Main article: War of the Beast

During the War of the Beast, the massive Ork hordes of The Beast wielded entire armies of Gargant's of unprecedented size and power.[5a] The largest and most powerful such machine, dubbed the Temple-Gargant, was encountered on Ullanor. This machine was the size of a Hive city and could wipe out entire armies with a single blast of its energy weapons.[5b]

The Gargant was first designated as an Ork war-machine during Commissar Yarrick's crusade to hunt down Ghazghkull Mag Uruk Thraka on Golgotha. It was here that Gargants, and smaller variants designated Stompas, fought against Imperial Titans and Guard regiments. The Gargants were found to be a potent match for even the Emperor-class Titans fielded by Yarrick, but despite their power one was felled by Yarrick's commandeered Baneblade, the Fortress of Arrogance.[2]

One of the more interesting instances of a Gargant was near a promethium processing plant on the Ice world Simia Orichalcae. The Valhallan 597th Ice Warriors had been sent to deal with an ork invasion force. Commissar Ciaphas Cain described the Gargant in awestruck terms[3a], as did retired General Jenit Sulla in her memoir Like A Phoenix From The Flames: The Founding of the 597th.[3b] The Gargant, however, veered off its course to attack a newly discovered Necron force, fresh from their tomb. Sulla describes "massive metal chunks falling from the Gargant" as "odd pyramids blasted at it". These are more than likely Necron Monoliths; the Necron threat had not really surfaced at this time so any and all descriptions of the Necrons were blurry at best.[3b]

Despite the efforts of the Necron forces, the Gargant attacked the Plant causing massive damage despite only one of its secondary weapons functioning. Noticing a massive gash in its left leg, Commissar Cain ordered all the Chimeras still planetside (the 597th was evacuating at this time due to the awakening of the Necron Tomb) to fire their heavy bolters into the metal wound. It slowly, then quickly toppled over, crushing many orks along with it.[3a]

A Gargant was also the primary weapon used by the Ork Waaagh! which attacked the city of Herapolis on the planet Espandor, in the Ultramar Coalition. The weapon had been constructed in secret in the caverns of Espandor[4a]. The Gargant's weapons blasted a large breach in the city's walls, but Ultramarines Sergeant Learchus Abantes and Chaplain Judd Clausel led an Assault Squad to infiltrate the Gargant and place demolition charges, which destroyed it.[4b]

Like all things Orky, there are no standard configurations of Gargant, but they do fall into several approximate types based on their size[Needs Citation].

The name Gargant is inspired by François Rabelais renaissance novel Gargantua, which tells the adventures of the eponymous giant king.