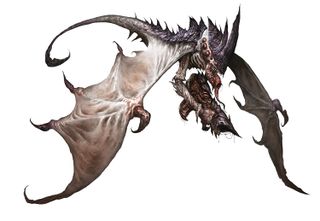 Gargoyles are a species of winged Tyranid derived from Termagants. They are often the first wave of a Tyranid swarm in battle with the purpose of sowing terror and confusion to keep the enemy off-guard whilst larger Tyranid creatures arrive.[1]

Gargoyles have many traits similar to the Termagant, including a smaller size with a compact but lithe body encased in a light exoskeleton, but also have less physical prowess than most Tyranid organisms. Compared to a Termagant their lower legs have atrophied to little more than stumps because of their wings. They generally carry Fleshborers and can even spit a skin-burning venom. Instinctively they go for their prey's eyes, blinding their foe in order to cause confusion. Through a quirk of their physical structure, they are capable of squeezing through gaps seemingly far too small for them, often getting into enemy buildings and defenses thought safe and secured.[1]

Under the direction of the Hive Mind, Gargoyles will even throw themselves into vents, exhausts and exposed gears, fouling machinery and weapons with their bodies.[2] 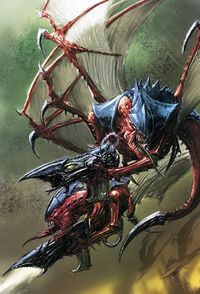 A pair of Gargoyles[1]