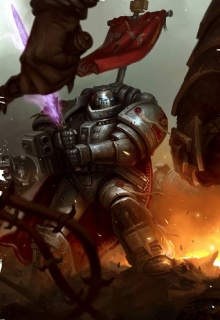 Garran Crowe is Castellan Champion of the Grey Knights' Purifiers order and the bearer of the Blade of Antwyr — a daemon sword that cannot be destroyed, nor wielded by lesser mortals.[1]

Crowe's wardenship of the Blade of Antwyr came about after the death of its previous wielder, Merrat Gavallan. His ownership of the blade has brought him both physical and spiritual peril. When not fighting the maddened mortals and desperate daemons that are drawn by the sword's evil, Crowe must do psychic battle with the Blade itself, for it strives ever to tempt him with promises of power or bind his will with the blackest sorceries. As such, Crowe never draws upon the Blade's powers, relying instead on its physical properties and his own skill at arms.[2a]

In 888.M41, the daemon Skulltaker's Blood Crusade seized the desolate planet of Birmingham and began rituals that would transform it into a Daemon World. Crowe deployed along with the Grey Knights of strike force "Iron Helm" into the heart of the daemonic horde. Judging that no other Grey Knight had the skill to best Skulltaker, Crowe challenged the daemon to single combat. Using a vial of the Emperor's crystalised tears to consecrate the ground, Crowe managed to weaken Skulltaker just enough to force a protracted stalemate. As Crowe battled Skulltaker to a standstill in the twilight ruins of the spaceport, the Grey Knights defeated the daemon horde.[2b]

During the Psychic Awakening, Crowe was sent to rescue the Grey Knights who were unable to escape Sortiarius, following the Chapter's retreat from the Daemon World.[3]