Garro: Legion of One (Audio Book)

Garro: Legion of One is an audio book story in the Horus Heresy Series. It was written by James Swallow and performed by Toby Longworth.

Nathaniel Garro, loyalist Death Guard, and hero of the Eisenstein, has found a new calling in his service to the Emperor. Surrounded by a cloak of secrecy, Garro travels the galaxy in pursuit of his new goal. His quest will lead him to heart of the most destructive warzones, and reveal a secret that will change the course of the Horus Heresy itself...

Garro, Tylos Rubio, and Macer Varren land on the ruined world of Isstvan III, where Horus first turned on his battle brothers. They are seeking an Astartes warrior that Lord Malcador has ordered them to find - according to Garro, the last one to be found before they learn the greater purpose of their mission.

Picking their way through the ruins of a city, the three Space Marines are startled to find a group of human refugees who managed to survive the devastation. They tell stories of a "beast" that lives in the ruins and hunts them at night.

While Varren keeps watch on the refugees, Garro and Rubio investigate the "beast"'s lair. Both of them are stunned by its ferocious attack, and it collapses the building with a krak grenade, before rushing out to attack Varren. Varren is stunned to see that the "beast" is actually an Astartes himself, calling himself "Cerberus." To Varren's horror, Cerberus picks up Varren's dropped bolter and guns down several of the refugees, before a psyker attack by Rubio drives him off.

Garro confesses that Cerberus is the warrior they were sent to find, but now he believes he cannot be saved and must be killed. Varren urges him to reconsider, believing that Cerberus, though feral and unhinged, is still loyal to the Emperor.

While Rubio is examining the bodies of the dead refugees, he finds a strange, triple cluster of scabs on each of them, that Garro recognizes from the Eisenstein. Unmasked, the refugees reveal themselves as Plague Zombies, and virtually all the corpses in the city rise, resurrected, to attack the Space Marines.

The three Marines, fighting desperately, are narrowly saved by the reappearance of Cerberus, but once the undead are dispatched, he attacks Garro. Garro manages to hold him at bay, and urges him to remember who he really is: Garviel Loken, former Captain of the Luna Wolves. Loken's mind gradually returns, and joins the other three on their journey back to Terra. 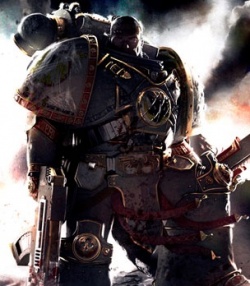