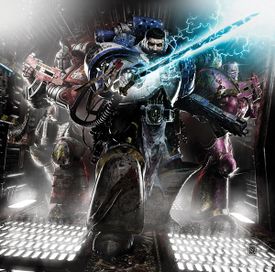 Garro: Sword of Truth by James Swallow, is an audio drama in the Horus Heresy Series. It was first published on November 26, 2012.

Sword of Truth is the third audio drama in the series featuring former Death Guard Nathaniel Garro, though it takes place between the events of the first, Garro: Oath of Moment and the second, Garro: Legion of One.

Nathaniel Garro, Knight-Errant and agent of the Sigillite, returns from the battlefields of Calth to find a new mission already waiting for him – a ragged fleet of Space Marines from several Legions lingers at the edge of the Terran system. With the presence of World Eaters and Emperor's Children causing concern among the loyalist defenders and drawing a grim parallel with his own frantic flight, Garro must look beneath the obvious if he is to determine friend from foe...

In the Somnus Citadel on Luna, Nathaniel Garro has just returned from the Veridian system, and awaits his next mission from the Sigilite. Outwardly stoic, he is still in deep turmoil inside: he has renounced his former Legion, the Death Guard, which has turned its back on the Emperor; every Astartes needs a purpose, but his first mission for Malcador has yielded no clues about the true goal he is working toward.

He masters these thoughts as Tylos Rubio appears in response to his summons; Rubio has been torn from his Legion much more recently than Garro, and his anguish is still fresh. Garro reminds him of their shared duty to the Emperor, and presents Rubio with a new suit of power armour bearing the same grey colours as Garro's own. With reluctance, Rubio accepts it, but is gratified to be fitted with a new psychic hood, a sign that he is once again free to employ his psychic gifts.

Khorarinn, one of the Emperor's elite Custodian Guard, arrives and curtly summons Garro and Rubio to accompany him on a shuttle to the battleship Nolandia. En route to the Kuiper belt, on the outskirts of the Sol system, Khorarinn explains that a small flotilla of merchant ships has been interdicted there, led by the Daggerline, a warship bearing the heraldry of the World Eaters. The ships' inhabitants claim to be loyalists, fleeing the massacre at Isstvan III much in the same way that Garro and his Company did aboard the Eisenstein. For this reason, Malcador believes Garro's insight may be useful, but Khorarinn makes clear that he is letting the Death Guard accompany the mission against his own judgement, and that he considers the rogue fleet guilty until proven innocent. Khorarinn also makes clear that he still considers the Emperor's Decree in effect, and warns Garro not to let Rubio use his powers in Khorarinn's presence.

When Garro explains their mission to Rubio, the latter shares whispers he overheard from the battleship's crew; Khorarinn has already prepared tactical plans, and issued orders, that the small, barely armed fleet is to be destroyed at the first sign of anything amiss.

Once the Nolandia arrives, Garro insists on making vox contact with the flotilla's ad hoc leader: Macer Varren, former Captain of the World Eaters' 12th Company. Khorarinn cuts across their pleasantries and warns the fleet not to break formation until he (and only he) is satisfied that they are not agents of the Arch-Traitor.

When Khorarinn, Garro, and Rubio take a shuttle to the Daggerline to meet with Varren in person, they are surprised to see other legionaries present: besides Varren's men, there are small contingents from the Emperor's Children, led by Captain Rakatio, and the White Scars, led by Captain Hakeem. In Khorarinn's view, Varren and Rakatio (and even Garro) are tainted by association with their Traitor Legions, but the White Scars have always been loyal to the Throne. Varren vouches for all of them, but Khorarinn says the flotilla will remain at rest until he has combed every inch of their ships for signs of possible treachery, ignoring Varren's pleas that many of the human refugees on the ships need food and medical attention.

Rubio's psychic powers are still rusty after years of disuse, but back aboard the Nolandia he warns Garro that he felt deception from one of the Legionaries on the Daggerline, though he cannot say from whom. Garro is worried: tension is thick in the air, and Khorarinn is more than ready to shoot first and ask questions later.

While debating the matter in Garro's quarters, they receive an encrypted vox transmission from Captain Hakeem: although Varren vouched for Captain Rakatio, Hakeem has it on good authority that Rakatio was a member of the secret Warrior Lodges that Horus used to separate loyalists from traitors before the rebellion.

They are interrupted by an alarm as the Mistral, one of the unarmed cargo haulers in the flotilla, breaks formation and attempts to flee the area. It does not respond to vox hails, and Khorarinn orders it destroyed, as an object lesson to the others. Garro and Rubio are powerless to prevent the battleship opening fire, vaporizing the cargo hauler and all hands aboard.

Garro and Rubio commandeer a shuttle and return to the Daggerline to confer with Varren in private, disobeying Khorarinn's orders. While Rubio guards the shuttle, Garro seeks out Varren, attempting to pacify him: for all their proven loyalty to the Emperor, they are still tarred with the same brush as their parent Legions. Horus has tainted the Adeptus Astartes, loyalist and traitor, in a way that will endure forever. Garro asks Varren which of the legionaries who came with him Varren trusts absolutely, seeking a delicate way to air Hakeem's suspicions of Rakatio. They are interrupted by Rakatio himself, after Varren says he trusts him completely.

Before they can go further, Khorarinn and a squad of armed naval ratings teleports to the Daggerline, showing them a pict-capture from the flight recorder recovered from the wreckage of the Mistral. On it, a warrior in the purple livery of the Emperor's Children is seen killing the crew and steering the vessel off course. Rakatio protests that he knows nothing about it, but Khorarinn places him and his men under arrest. Rakatio is tempted to resist, but Garro and Varren plead with him to go along peaceably, swearing on their honour that Rakatio and his men will receive justice. Hakeem and his men, whom Khorarinn has already judged trustworthy, volunteer to escort him and the prisoners to the ship's brig.

Meanwhile, Rubio has been probing the inside of the Daggerline, following the psychic trail he sensed during their first meeting. It leads him to one of the ship's quarters, where he finds a lodge-medallion in an officer's personal effects. When he rushes back to find Garro and Varren, he tells them he found it in Hakeem's belongings.

Garro voxes Khorarinn, but it is too late: Hakeem and the White Scars have ambushed the Custodian, shooting them down from behind. Rakatio and his men die before they have chance to fight back, though Khorarinn manages to take a few of the traitors with him before he too dies.

Trapped on the Daggerline, Garro, Rubio, and Varren hear Hakeem broadcast a declaration across the flotilla, that Khorarinn has been killed by agents of Horus, and the White Scars will purge the traitors from the remaining ships. The three loyalists realise that Hakeem sacrificed one of his own men to sabotage the Mistral, and that his Techmarine, Harouk, must have altered the pict-capture to incriminate Rakatio.

In a panic, the flotilla splinters and tries to flee, even as the Nolandia, obeying Khorarinn's final orders, begins systematically destroying each ship.

Garro, Rubio, and Varren rush to the Daggerline vox array, to find its officers already killed. They are confronted by a squad of White Scars, as Hakeem taunts them over the intercom that the rest of Varren's men have already been executed. Though the White Scars outnumber the three, this is a bad move: Varren goes berserk, shrugging off bolter wounds and tearing the traitor Marines apart with his power sword.

Garro urges that they must escape, but Varren refuses, swearing to stalk the halls of the ship until he or every last one of the White Scars are dead. Garro urges him to survive, and carry his vengeance to the rest of his Legion, and his father, but Varren shoots back that Hakeem is ahead of them, and every way off the ship will be guarded. Rubio says he has another way, and leads them deeper into the interior of the ship.

Arriving at the scene of Khorarinn's murder, they are confronted by Hakeem and the majority of his men. Garro rebukes the White Scar for his treachery, but Hakeem says he and his men are in the right: Horus's victory is inevitable, and he will elevate the Adeptus Astartes to their rightful place as masters of the galaxy — though he is forced to concede that, thus far, Jaghatai Khan and the majority of the White Scars remain loyal to the Emperor. At Varren's word, the three warriors charge. While Rubio blasts at the White Scars with his powers, Hakeem engages Garro and Varren with his twin power swords. Hakeem has gravely underestimated the World Eater's fury and the Death Guard's skill, falling back once he has lost an eye to Varren's sword and had both of his own snapped in two by Libertas. He shouts for his men to take aim with their boltguns, but Rubio calls Varren and Garro to his side, having found their way out: Khorarinn's teleport homer, pulled from the dead Custodian's belt. As Rubio activates it, Hakeem screams for his men to open fire, but the three warriors disappear and the White Scars' bolt shells pass through empty air.

Aboard the Nolandia, Garro, Varren, and Rubio storm onto the bridge and order the crew to cease firing on the refugee ships. Garro tells the gun crews to re-target all weapons on the Daggerline, while sending Rubio to immediately prepare an astropathic message to the Imperial Palace. Garro hesitates, telling Varren that the choice is ultimately his whether Hakeem and his men should be captured or... before he even finishes speaking, Varren gives the order, and the Daggerline is vaporised.

On Luna, Garro is debriefed by Lord Malcador, who commends him for finding and executing the traitors. Garro is not at rest, protesting about the damage inflicted on the refugee fleet by Khorarinn's orders. Malcador shrugs and says it is a regrettable consequence of the rebellion. He also adds that a single ship from the refugee fleet managed to slip past the Nolandia and enter the solar system, likely carrying one or more of Horus's agents to Terra.

Rubio enters with Varren, now dressed in the same grey armour. Malcador accepts Varren's wish to join the Knights-Errant, but warns him that for the time being, their role in the war must be a covert one. He promises his Knights that the time will come when they learn the full purpose of their mission, and have their day against the traitors, but until then, they will be his "knife in the dark," seeking out and destroying Horus's agents inside the Imperium.