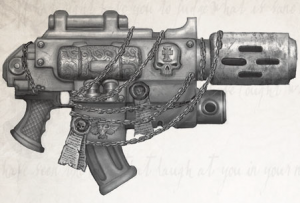 Gate Maker is an Astartes combi-melta used by the Invaders Chapter. Though no part of this combi-weapon is less than peerless, from the inner mechanisms of the bolt chamber to its hardened adamantium casing, the true virtue of Gate Maker lies in the melta weapon integrated into the main weapon. It is one of the most efficient tools of death in all the arsenals of the Deathwatch, being capable of breaching entry to a reinforced bunker with the barest trace of fuel expended. It can fire five shots from its integrated meltagun using a normal combi-melta fuel flask with advanced dispersion systems.[1]