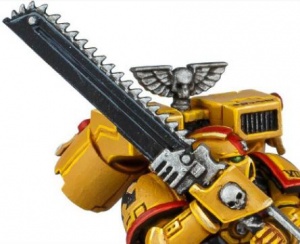 Gauthard is a Brother-Sergeant of the 3rd Company of the Imperial Fists Chapter, known as the Sentinels of Terra.[1]

Sergeant Gauthard is one of the best known Veterans, an expert swordsman who even served as the Company's Champion in the year it took for the previous Champion, Lydon, to recover from wounds suffered at the claws of the Daemon Maethox. Gauthard is commander of the Sentinel's Sword, a lauded Assault Squad who have garnered a reputation as much for their ferocity in battle as their dedication to duty. It is said that unlike many Assault Squads of the Space Marines, the Sentinel's Sword have never struggled to bow to even the most unpalatable order of all – the painful order to withdraw from the battle. Many think this is the reason that three different Captains have noted Gauthard for commendations in battle, such as in the Krysis Campaign where his 3rd Company fought alongside the 5th Company of then-Captain Vorn Hagen. As the Cultists of the notorious Mecheretic Consortium charged through the burning manufactoriums, the Sentinel's Sword met their advance, an order they executed with relish.[1]

With every sweep of his Eviscerator, Death Curse, Gauthard dismembered more of the treacherous foe, but still more evil Cultists poured forwards. After minutes the Assault Squad fought covered in blood and gore, their war spirit singing with the joy of butchering traitors to the Emperor's Throne. When the signal came with the order to fall back, lesser officers might have hesitated, but not Gauthard. With a single pulse across the voxnet his Marines fell back, leaving the foe stunned for only a moment before the massed cannons of the 5th began a wholesale execution.[1]