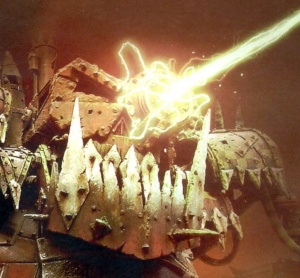 Stompa firing the Gaze of Mork[1a]

Stompas are often seen as gigantic representations of Ork Gods like all other Gargants and it is quite common for them to have life-like heads. Gaze of Mork (or, possibly, Gork) is an enormous and unpredictable force beam generator, built in into the head of the Stompa. It varies in design but is usually mounted to fire from Stompa's eyes. In characteristics it is similar to Zzap Gun, but much more powerful then even a Big Zzappa. They are just as unpredictable, with the beam that can melt a Baneblade with its first shot, and fail to kill a Guardsman with the next- or do anything in between. Meks often delight in diverting the power of the Stompas roaring engines, giving them enormous power. Such devastating power can tear even the mighty Titans of the Adeptus Mechanicus asunder in a storm of energy so all Orks' enemies are right to fear the mighty gaze of their gods.[1b][2]