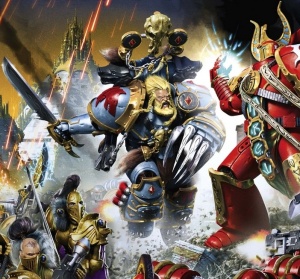 Geigor Fell-Hand was a Thegn of Dekk-Tra, the 13th Great Company of the Space Wolves Legion.[2] Impetuous and proud,[5] he was known for his fury and hatred of sorcery.[1]

Geigor Fell-Hand was known as a valiant warrior, but his command record was marred by a history of reversals on the battlefield.[5] The worst of these was on the world of Droggorn, where the Space Wolves were fighting alongside the Thousand Sons against orks. The Thousand Sons retreated in what Geigor considered an act of cowardice and betrayal, resulting in the death of his entire pack.[6]

When the order came for the censure of the Thousand Sons, Geigor was among those who pushed for the Legion to be slaughtered. During the Battle of Prospero, he commanded one of Dekk-Tra's Blooded Claws assault formations.[5] He cautioned his Jarl, Bulveye, against following the Thousand Sons through the portals they were using to travel across Prospero, but his warnings were ignored.[2]

Bjorn later took an artisan lightning claw from the armoury of the Hrafnkel to replace the arm he lost on Prospero.[3] Given that he became known as the Fell-Handed and Trueclaw (the claw he would go on to wield as a Dreadnought) has the same design on its blades, it is likely that this was the lightning claw once meant for Geigor.[4] 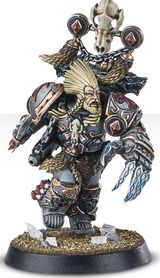