The Genesis Chapter are a Successor Chapter of the Ultramarines Legion, created during the Second Founding.

First amongst the Primogenitors, the Genesis Chapter are dogmatically loyal to the memory of Roboute Guilliman, and can be counted upon to fight at the Ultramarines' side without hesitation.[1a][13c] They have the honour of being the first of the primogenitors and were formed from the noblest Ultramarines veterans who survived the Horus Heresy. Upon their inception, their first battle wrested the planet Newfound from the Word Bearers.[5]

Another point of commonality with the Ultramarines is the Newfound Expeditionary Auxilia, a force of armed Chapter Serfs that fight in support of the Genesis Chapter, similar to the units of the Ultramar Auxilia.[13a]

The Genesis Chapter wear red armour.[13a][13c] Their symbol is a stylised black alpha superimposed on an inverted white trigon.[13a] 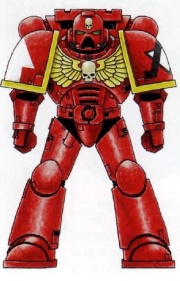