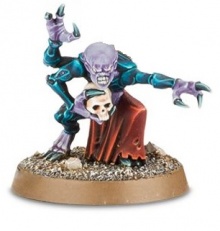 A Genestealer Familiar is used by Genestealer Cults. They usually appear in the fourth generation of Genestealer infestation as their existence is dependent on a Magus.[2]

Should a Patriarch or Magus of a Genestealer Cult dominate a region completely, the psychic shadow that gathers around them will grow darker and thicker until it begins to coalesce. This ever-shrinking miasma hardens into a many-limbed form known as a familiar. When the familiar is fully manifested, it skitters from its hiding place and runs to the heel of the xenoform that unconsciously created it. From that point on, it is as much a part of them as any other body part. Small and nimble, such a familiar is an excellent spy, able to scuttle through the tightest crawlspaces and report back to the cult’s leader through the potent psychic bond that links them. Should its master be threatened by a physical attack, the familiar will leap up to fanatically defend its master.[2]