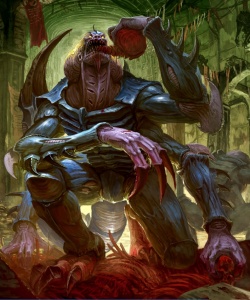 The Patriarch is always the oldest purestrain of the cult. As the first Genestealer of the group, all other members are psychically linked through it; this leads it to attain a level of intelligence much higher than that of other Genestealers. Over time, it can become a very powerful psyker; it grows in size and strength, gaining a bloated and immobile appearance. A Patriarch whose cult is on the verge of taking over a world becomes a psychic beacon, attracting Tyranids to the planet; as the Tyranids approach it will fall under the power of the Tyranid Hive Mind, and begin leading the cult in attacks on vulnerable positions to facilitate the inevitable invasion. It is assumed that it knows nothing of its role in the Tyranid invasion, and once the Tyranids are successful, it and the brood are also consumed by the Hive Fleet.

Twice the height of a Space Marine and with strength enough to slice an Ogryn into bloody chunks, this creature is a leering nightmare of tooth and claw. In a flurry of whipping limbs and diamond-hard talons the Patriarch can tear through platoons of heavily armoured warriors and even light vehicles. Yet it is the hypnotic spell with which it binds its chosen hosts that mark it out as perhaps the most dangerous Tyranid yet encountered by the Imperium. The uncanny powers of the Patriarch make it a fearsome puppet master, a threat so pervasive it has a xenocode threat designation unto itself. By spreading the Genestealer Curse, this creature is capable of destroying not just warriors and war machines, but entire worlds.[1]

Patriarchs are known to live for hundreds of years, and unless killed, are practically immortal. They are seen by the cult as a "father" figure, and should their destruction come to pass, the cult would be thrown into disarray. Eventually, however, the next oldest purestrain genestealer would assume the role of Patriarch. The relationship between a Patriarch and a Broodlord (if there is any) is unknown.