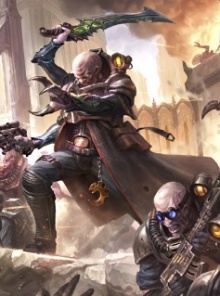 A Genestealer Primus is a type of genestealer cult hybrid of the 3rd or 4th generation[2]. While it is the role of the Magus to corrupt, the Primus exists solely to lead his cult into war. A Primus only emerges from hiding when the cult is ready to openly act; he is a war leader whose natural ferocity is paired with the best stolen weapons and wargear the Cult has to offer.[1]

The Primus is a commander in times of war, but whilst the cult still remains in hiding, it is his duty to spread the Genestealer Cult to other planets. His innate gift for leadership and coordination sees him militarize the cult in short order, masterminding the takeover of vehicles and even spacecraft. A strong champion and lauded hero amongst the brood, the Primus emerges only when the cult reaches a position of strength. Such individuals appear in an early generation, but typically not until the third or subsequent cycles. The imperative to trigger the creation of a Primus is either when the cult’s numbers reach critical mass, their numbers and influence sufficient to take over a prey world, or when a hive fleet looms on the edge of that planet’s system. The Primus’ particular quirk of the Genestealer life cycle occurs independently, enhancing the development of an especially robust host to produce a largely humanoid warrior of prodigious strength and tactical guile. Where a Magus boasts a mental acuity and telepathic powers the equal of a Space Marine Librarian, the Primus has a supernatural dexterity and surety of focus that can see him bring down adversaries twice his size.[2]

The wargear of the Primus complements his approaches of stealth and guile, allowing him to lay low those in his path without raising any unwanted attention. Each Primus girds himself with the finest equipment the cult can provide, distilling toxins from his own virulent bloodstream and delivering them via silent-firing needle pistols and paralytic toxin claws. Some wield strange, sentient swords thought to be grown from the bony secretions of the Patriarch’s bio-throne – these blades are not only symbols of the cult-father’s trust, but deadly weapons in their own right, capable of stealing the life energy from those they strike to leave only withered husks behind.[2]

Should the cult survive their inevitable battles in strength, it will be the Primus that leads it to fresh prey, where the Purestrain Genestealers will begin the cycle of infection and insurrection anew[2] 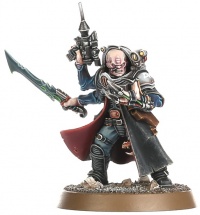