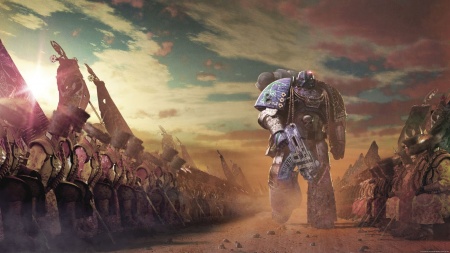 The Geno Five-Two Chiliad was a regiment of the Imperial Army raised on Terra, one of the Old Hundred, those Terran military formations that the Emperor allowed to continue past Unification and on into the Great Crusade. One of the oldest and most respected regiments in the Imperial Army, the Geno Five-Two Chiliad seemingly met its ultimate fate on the world of 42 Hydra Tertius, a few years before the beginning of the Horus Heresy. Known for being produced via genetic selection, the standard soldiers of Five-Two Chiliad were at the very peak of what standard humans could achieve physically. Whilst officers were generally weak and female, possessing Psychic abilities. This process of genetic selection later helped inspire the creation of the superhuman Thunder Warriors.[1]

Originating on Terra during the Unification Era, the Geno Five-Two Chiliad were selected to be one of the Terran military formations allowed to continue under the banner of the Emperor, and were part of the initial Crusade force sent out into the galaxy. As such, by the approach of the Horus Heresy, they had one of the longest and finest military histories of any Imperial unit.[1]

A genic unit, the Geno Five-Two Chiliad bred the majority of their manpower, in a tradition of genetic-engineering that was said to have been part of what inspired the Emperor to create the Primarchs and their Legions. The highest rank in the regiment was that of Uxor, a position only able to be held by women. Upon selection for the future position of Uxor, teenage girls had their ovaries removed and stored in the regiment's gene-banks, there to be used in conjunction with the gene-codes of established martial lines. The resultant children were born to be Geno warriors and uxors. An additional part of the process, not fully understood, resulted in the awakening of extremely weak psychic powers in the female candidates. These powers typically took the form of a 'felt connection' to their men, and an ability to perceive their operational situation at a higher level. This practically manifested on the battlefield as a quicker and more intelligent response to strategic situations, and a well-informed command tree. Known as 'cept, this power burned out quickly, with the result that most uxors became powerless as they approached the age of thirty, thus lessening their usefulness. Removal from command positions quickly followed the loss of 'cept, and it was an uxor's responsibility to train at least one aide, or junior, in order to replace her.[1]

In order to keep the gene-stock fresh and to ensure flexibility and originality of thought, the senior fighting rank in the Geno, that of Hetman, was only open to non-Uterine soldiers. There was no shortage of recruits for this position, due to the reputation of the regiment.[1]

The Geno Five-Two Chiliad fought throughout the Great Crusade, but their most notable actions were those under the command of Lord Commander Namitjira, where they battled the heretical forces present on the world of Nurth, and then were deployed - and subsequently lost - in mysterious circumstances upon the world of 42 Hydra Tertius battling forces loyal to Commander Namitjira.[1]

The Geno was formed of one thousand companies. More properly termed as a brigade, the regiment appeared to treat the company as the primary tactical unit, assigning one or more to every undertaking that came their way. As such, each company - while being mainly an infantry unit - possessed enough organic armour and supply elements to sustain it in the field.[1]

The standard Geno troops, being genetically selected, all displayed physical characteristics deemed preferential for a warrior; they were big, tough, muscular men.[1]

Junior officers, normally selected from the troopers, appeared similar. The senior rankers, however, were not gene-bred, and so could appear slim or even weak-looking in comparison to their men. The Uxors were typically slim and small women, with their juniors being teenage girls.[1]

Command rank, having authority over one or more companies and/or part of the regiment's logistics and intelligence departments.

Company Commander. Apparently the most senior military rank achievable in the Geno, due to its nature as a brigade of companies.

Subordinate rank to Hetman, several in a company.

The lowest and most numerous rank in the Geno, that of front-line soldier. Selected to be at peak physical condition.

The Geno wore a bulky-seeming uniform that nevertheless allowed them to operate with some grace of movement. A thick leather and armourchain bodyglove formed the main item of clothing, with waist-length coats and waist-length capes of yellow Terran silk commonly worn over the top. Their armour segments were lined with fur, and coats and capes were embroidered with company symbols and other military devices. Helmets were of the spiked variety, often trimmed with beads or fur. Standard issue gear was carried in a lightweight pack, with a long sword-bayonet slung at the waist. Uxors wore black, lightweight variants of the uniform, often covered over with gray cloaks or coats.[1]

The standard issue weapon of the Geno was the lascarbine, with support weapons being RPG-sowers, fire poles and support cannons. Additional equipment issued during the Nurth campaign consisted of glare-shades and liqnite sprayers.[1]

They possessed some amounts of light armour, such as the Centaur and transport vehicles such as the Scarab.[1]