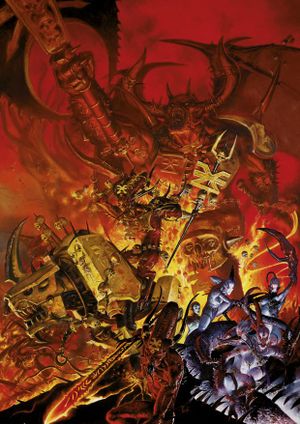 The doom of Gheistos began with a seemingly insignificant incident. A worker no older then 12 began to suffer from crippling headaches and hearing voices. Unaware that he was a latent psyker, the boy was brought before the shiftmaster during a particularly severe headache for failing to work diligently enough. In the thrall of his headache, the boy lashed out with a strange curse that not even he understand. Reality began to buckle and fat-bodied flies bearing the boys own face and chanting prayers to the Chaos God Nurgle discouraged from his mouth. The boy shattered open like a gory flower and now acting as a daemonic portal, something terrible began to push its way through the Warp.[1a]

More flies, now accompanied by Plaguebearers, spread from the boys remains and swarmed across the farm. Those touched by the flies were infected by the Black Pox and over the course of a matter of hours were transformed into Plague Zombies. However due to the efficiency of the local Adeptus Arbites garrison, the infected farm was quickly quarantined as the worlds Planetary Defense Forces were mobilized to combat any escaping zombie or trapped worker alike. Eventually the Daemons were driven back as the complex was reduced to ash.[1a]

Nurgle was not pleased by this turn of events. Vengeful, he petitioned his brother gods Khorne and Slaanesh for aid and combining their powers they enlarged the portal on Gheistos. This time, Daemons pushed through by the dozen instead of ones and twos and now Bloodletters and Daemonettes accompanied them. The Arbites and Planetary Defense Forces were overwhelmed and the planetary Governor sent out a distress call which was received by the Vorpal Swords Space Marine Chapter. Even though the Vorpal Swords struck like lightning, it was too late for the populace which was either converted into zombies by the spreading plague, were cut down by hordes of Daemons, or lost their minds and clawed out their own eyes in desperation.[1b]

Khorne however became infuriated that Nurgle had turned to his primary rival Slaanesh for aid. In his rage he created a torrent of boiling blood over the world which swept away both Daemon and defender alike. Only Daemons of Khorne and surviving Vorpal Swords Adeptus Astartes remained as the once-peaceful world of Gheistos became a hellish slaughterhouse. The Vorpal Swords, having suffered heavy casualties, called for reinforcements. Three weeks later the Grey Knights, the finest Daemonhunters of the Imperium, landed on Gheistos. Facing the Grey Knights, the Daemons of Khorne began to lose ground and eventually purged of Daemonic presence altogether.[1b]

Though cleansed, the Inquisitors of the Ordo Malleus judged that the world was tainted beyond all hope and Exterminatus was enacted by Strike Cruisers of the Grey Knights. Though a mere few months had passed since the original Warp Rift had opened, Gheistos was no more.[1b]