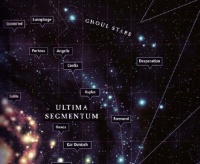 The Ghoul Stars, also known as the Ghost Stars,[6] are a desolate region of space[1] located in the extreme northeast of the galaxy. They consist of worlds lit by the cold rays of dying suns.[4]

It is known as a feared area of void-space located in the northern part of the Ultima Segmentum.[5]

Among the Xenos populations within this area were the Cythor Fiends[1] along with other creatures out of primal nightmares such as Togoran Bloodreeks. Among the native inhabitants of the Ghoul Stars are creatures so alien that they seem supernatural.[4] This region of space was once home to a number of Human inhabited worlds. However, an ancient threat is believed to be responsible for the destruction of these planets and accounted for the large number of formerly human inhabited Dead Worlds.[2b] The inhabitants of the Ghoul Stars have been described as being supernatural and pose a threat to the galaxy.[3] Among the most horrifying of threats native to this area of space is the Necron Bone Kingdom of Drazak.[4]

In addition, the small, independent Human empire of the Ashen Claws is located in the Ghoul Stars.[9a][11]

The Imperium has only a light presence in the Ghoul Stars since the Horus Heresy, and it is known that no Imperial expedition ever returned from its deeper regions.[1] However, the Death Spectres Chapter maintain a constant vigil over the Ghoul Stars in ensuring that the menace posed by its inhabitants do not threaten the galaxy again.[3] The Deathwatch of Fort Pykman also watch the region,[7] while the Carcharodons would also periodically pass through the region.[11]

In circa late M34, a great threat from the Ghoul Stars referred to as the Pale Wastings after the Nova Terra Interregnum is known in the records of the Imperium. What few records remain of this event suggest that this threat was both a "Star-spawned plague" that swept across many worlds and as "Nightmare engines" that slaughtered entire sectors. The Novamarines along with eleven other Chapters were dispatched to combat this menace in what was believed to be an apocalyptic struggle. Among the only survivors were the Novamarines with the others being lost, though the only evidence of this in later years was an ancient stelae located in the Imperial Palace on Terra itself that refers to the bravery of the Chapter.[2b]

In 601.390.M38, the Marines Errant Space Marines entered into the Covenant of Ecale with the legendary Sia'hadn Ecale of the Rogue Trader House of Ecale. Between this point and until 433.M38, the entire weight of the Chapter was added to the Rogue Trader's own army that went on a voyage of war and exploration into the Ghoul Stars that lasted more than forty years.[2a] In 977.M41, an Eastern splinter of a Tyranid Hive Fleet passed through this region where it became disorientated and twisted before heading towards the Orask system.[5]

Upon his appointment as High Marshal, Helbrecht of the Black Templars is known to have led a Crusade in 989.M41 against the Cythor Fiends that resided within the Ghoul Stars. Within the span of eight years, the xeno populations of the outlying systems had been exterminated, whereupon the Crusade pushed to the alien homeworld. However, upon reaching the core systems, the Black Templars discovered them to be empty with no trace of the aliens found. Before the mystery could be fully investigated, the Black Templars were called to aid Armageddon that was being besieged by the Orks.[1]

In M42 the Black Templars Oparian Crusade disappeared into the Ghoul Stars, though many believe they continue to fight on against the enemies of mankind.[8]