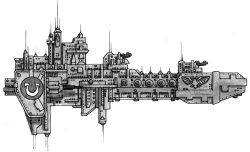 Gladius Class frigate of the Ultramarines[3]

The Gladius Class Frigate is part of the Space Marine Fleet, fulfilling a role similar to that of the Sword Class Frigate in the Imperial Navy. It is also used by the Adeptus Mechanicus Fleet.[2]

The ship is crewed mainly by chapter serfs, with only a single squad of Space Marines on board, either on the bridge, or at other command posts around the ship.[1]

The Gladius is armed with a mid-sized weapons battery, much like the Sword class, but its engines are about twenty percent more powerful than the Sword. This enables the Gladius to take advantage of the enemy's movements, darting into holes left in the battle line, and using its weapons batteries to good effect. The ship is shielded as well as any other escort, but due to the nature of its role in combat, has an excellent turret array for its size, comparable to that of a standard Imperial Navy cruiser.[1]